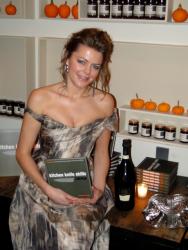 In addition to writing, Lumb works as an international private chef to the stars, including Elton John, and as a culinary consultant. However she is best-known for graduating the BBC’s ‘Masterchef’ contest as finalist. Fame through television has seen an escalation of interest in both her book (a larger print run is planned for 2010) and her personal profile (Lumb’s mother is employed, full-time, to respond ro fan mail).

Sipping the couth, pear-scented Prosecco with brittle, sweet Parmesan crackers then tense, immaculate Brillat-Savarin and powerful Fourme d’Ambert blue, I listened to the speeches unfold. ‘We look for specific attributes in an author,’ explained the representative from publisher, Firefly Books. ‘These include handing in the manuscript on-time, and having nice hands!’

Shimmering in a silver dress by designer, Vivienne Westwood, Lumb admitted to nerves even though she retained ‘grace under pressure’ in Masterchef. She made particular mention of the book’s photographer, Andrew Atkinson, who ‘still kept life fun’ despite amassing a pool of over 10,000 photographs. She also thanked judge, Michel Roux Junior for his trust and support, and laughed when it was pointed out that she had received no fewer than three marriage proposals since the programme was aired.

Afterwards, a chat to one of La Fromagerie’s affineurs revealed the scrum to get the venue ready, which happens to be one of Lumb’s favourite shops along with neighbour, the ‘Ginger Pig’. ‘We had three tall pallets of cheese delivered this morning,’ explained the manager of the humidity-controlled glass cheese vault. ‘Not only did we have to store them away, but some required washing and brining. Our advantage is our ability to raise the cheeses to maturity…’

You can read our review of ‘Knife Skills’ .