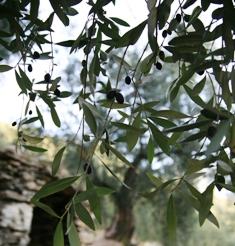 It seems that much of what I have attended recently is focussed on Italian produce and a tasting of olive oil from Liguria recently was yet another. The Liguria region of Italy is in the North-West part of the country and shares a border with France. The purpose of the tasting which was being held in a conference room at The Crown Plaza Hotel, New Bridge Street, Blackfriars, London, was to alert us to the quality of Italian olive oil generally, but in particular to that produced in Liguria which like many other regions’ oils has DOC status.

For this event, the Italian Trade Commission, who had been responsible for my invitation, were represented on the distinguished panel that was also comprised of a qualified olive oil taster and expert, as well as Michelin Starred Chef Giorgio Locatelli.

Our olive oil expert explained the qualities of good olive oil and he, together with the other panel members, boasted that olive oils produced in Italy were the best in the world. He then proceeded to tutor us on how one should taste olive oils to get the full flavour. Apparently the oil should be body temperature, you then take a little onto your tongue, let that touch the roof of your mouth and then draw air into your mouth from the sides. As you might imagine, this makes quite a noise, and in a room with some 50 people doing the same thing I have to say, it was a little amusing.

We tried a few of the quality Ligurian olive oils, the principal ones we tasted were the extra virgin oil which was very light in its feel and taste in the mouth with a nice fruitiness to it and the virgin oil, which was stronger in flavour, with greater depth and was a little pungent. Both were very good and would make excellent dressings alone or mixed with other delicate ingredients.

The discussion in the room turned to other issues, such as the history of olive oil production and here we were told that formal production in Italy has been going on since the 17th Century. We then heard facts about shelf life and keeping olive oil.

Apparently light and oxygen are the two principal enemies of olive oil, both leading to deterioration of the product, so a good tip here was that olive oil should be purchased in small quantities and in dark bottles or it should be kept in the dark. Asked about freezing the panel told us that whilst this works sufficiently well, the oils should be used within a day or so of thawing, as the freezing process accelerates its deterioration.

We were also told that olive oils should be consumed within 18 months of production, but Giorgio Locatelli added that he had oils that were somewhat older than this, which had been stored well and were still of excellent quality when opened. For me the main message that came from this was buy your olive oil in small bottles, if they are not dark bottles keep them in a cupboard away from the light, or perhaps wrap them in something that will keep the light out, such as foil.

We were also told that cooking with olive oil kills off its health qualities but here Giorgio explained that if he were to dress a dish with a certain olive oil, he would use that same oil in the cooking process to ensure uniformity of taste. Giorgio also said that in his view olive oils are best used in dishes that come from the area where the oil is produced, principally because the dishes would have been created to have harmony in all its ingredients.

Giorgio then excused himself to prepare lunch with his team from The Refettorio for the invited guests. The Refettorio, on the entrance floor of The Crown Plaza. I have to say, it was excellent. We started with an octopus salad with new potatoes and taggiasca olives (which are grown in the Liguria region) and this was a lovely dish, the octopus retaining a little bite and the accompanying potatoes and olives were nicely dressed with this Ligurian oil. We moved on to a lasgnette with pesto, potatoes and green beans , which was full of flavour containing masses of pesto that brought the other ingredients together really well. I followed with roasted rabbit, potatoes, pine kernels and black olives, which again was a marvellously composed dish and to finish a fliourless chocolate sponge served with olive oil ice cream, the sponge great and the ice cream had just a light olive flavour that worked well with it.

This was a great lunch in which Giorgio used Ligurian olive oil throughout. This is a fine product with lovely flavour and should be tried. I am grateful to the Italian Trade Commission and of course, to Giorgio, for introducing me to it. It is worth searching out.