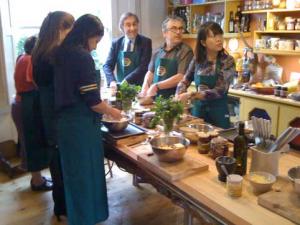 Ã¢â‚¬ËœI did think of going into the army when I was old enough,’ muses Guy Tullberg of Tracklement’s. Ã¢â‚¬Å“Sort of Parachef, front line cooking, sent in ahead to get the pots on the stove, solve dinner crises, that sort of thing.’ I can see it now, a man landing behind enemy lines armed only with a camping gaz cooker, a wooden spoon and a colander on his head.

Instead though this son of the founder of Tracklements decided to stay in the family business of making chutneys, pickles and, these days, a lot more besides just as they have done for over 40 years since William Tulberg made himself a pot of mustard from a recipe he found in an old book. He tried the result on a local pub landlord who liked it and ordered some more. From that point an industry was formed.

Today the company has slightly larger premises than the original converted bakers they started in, but they maintain an old fashioned pride in making as much by hand as possible. As Guy says, the eye can tell when a chutney is cooked far better than any machine because the ingredients are never, and can never be, exactly the same every time.’You look for the moment when as you stir the mix it leaves a parting for a few seconds before it rushes back in. That’s when it’s ready.’

It’s clear that Tracklements is one of those rare industries Ã¢â‚¬â€œfamily owned, medium sized and with a proper caring attitude to both what it makes and who makes it. Guy seems to know all his staff by name and takes a keen interest in their well-being.

He’s here today at Kitchen 52 to watch Mitzi Wilson create some dishes with his Tracklements, well actually we have to make them under her direction. It’s all good fun but makes me regret wearing a suit rather. It reminds me of when I went to a wine tasting wearing a white suit and emerged two hours later looking like Sir Les Patterson (I can’t spit, I don’t have the tongue rolling gene so I just dribble).

Obviously each dish we did had a Tracklements product as an ingredient, making the point that simple, tasty dishes can be knocked up no time when you use a’cheat’.

The great thing at these sort of cooking class turnouts is to make sure you mark your efforts clearly before they go in the oven. That way you avoid having to eat yours when they come out and can instead feast on far better efforts made by your fellow cooks.

And indeed they all tasted pretty good for the amount of effort we put in, although the curry was a bit watery.

Tracklements are well worth checking out for authentic tastes; just don’t be put off by the rather naff packaging, which manages to be neither modern nor old-fashioned, just dull.