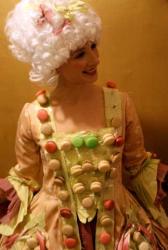 Macarons, rather like cupcakes, are painfully fashionable right now. They twinkle in the windows of bakeries and patisseries like multi-coloured jewels and make people, mostly female, squeal with excitement in the same way that particularly cute baby shoes do.

Enter the Bougie Macaron & Tea shop in Covent Garden, recently opened and primed to capitalise on the latest trends of afternoon tea and desserts in whacky hues. Wednesday night’s official launch provided an opportunity to see if macarons are worthy of all the hype and to judge whether the café on Russell Street is likely to become a success.

The size of the place means that they can at least rely on a degree of forced exclusivity, as there is only room for around eight tables. The interior appears to be an attempt to blend Parisian chic with Alice in Wonderland magic and, although it looks a little ‘budget’ in places, the compact café is not without charm or character.

Adding to this character, and rather appropriately given the café’s location in the middle of theatre land, the evening included an actress floating around as ‘Lady Macaron’, a role that involves wearing old fashioned clobber adorned with macarons ripe for plucking.

And pluck we did. Repeatedly. For the outpouring of emotion provoked by these little sweets is easily understood once you bite through the delicate outer shell, past the squidgy, slightly moist, airy almond ‘foot’ and into the sweet buttercream centre. These are light but rich, chewy but airy mouthfuls of sugar that almost melt in your mouth despite their varied texture.

Frenchman Jean Nedelec makes the macarons and has spent time perfecting the recipes, as well as conjuring up new flavours to complement the classics like vanilla, chocolate, raspberry and pistachio. His eyes light up with excitement when he talks about capturing tastes and perfumes in the future; he is currently dreaming about a new range to showcase traditional English combinations like apple and bramble and puddings like sticky toffee pudding. He talks animatedly about pleasant tastes and smells like the only natural thing to do is to make a macaron whenever you come across them

I tried an excellent orange blossom tea, part of the café’s loose-leaf tea range, and some of a savoury selection that includes terrines, charcuterie meats, artisan cheeses and smoked salmon. With classic English afternoon tea also on offer, there is plenty to choose from but inevitably it’s the macarons that steal the show. While bigger macaron patisseries like Ladurée and Pierre Hermé are already established in London, Bougie seems like a more modest, less commercial venue and the chance to sample Nedelec’s creations is well worth taking, whether you’re a seasoned squealer or a macaron virgin.