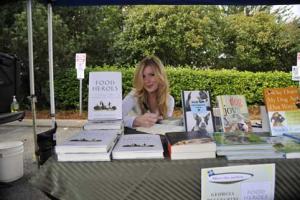 ‘I took a leap of faith. I wanted to get back to my roots, get back to the land and get back to using my hands – so I became a chef”. So begins my chat with Georgia Pellegrini, whose gutsy move to quit her high-flying Lehman Brothers job has certainly paid off. Enrolling in the French Culinary Institute she did what so many dream of, ‘stepped off the grid” and did something that made her happy. Her much acclaimed first book, Food Heroes was published in September following her hugely successful blog. Foodepedia finally managed to catch up with her, minus her infamous shotgun, on her recent foray – or should that be forage – to Blighty.

It was during her time as a chef that the idea for her Food Heroes book was formulated. It was the culinary artisans she met through the restaurants that really caught her imagination; ‘the people who were bringing in their foraged mushrooms, or the olive oil that they were pressing. I would befriend these people, and on my days off I would go foraging in the woods with them.”

What she found most interesting was that many of these people had similar stories to her own. They had given up serious careers in order to pursue a passion within food. One man she found particularly inspiring was Hans Otto, who, in his previous life had been a Mechanical Engineer. Whilst transporting dynamite to land mines, Nitro Glycerine had permeated his skin causing a severe illness. It was during his recovery that he was introduced to, and fell in love with Honeybees. ‘He was using the same skills he had as a mechanical engineer to help solve the current problem with colony collapse”. Georgia is certain about one thing, ‘I think it’s really cool if people can use the skills they gained in their high tech job and apply it to something that makes them happy.”

It is her enthusiasm and passion for other people that is obvious. It is not simply Georgia’s journey that excites her but the stories and tales of others. ‘It is what captivated me and made me want to tell their stories. They’re all people I felt a connection to.”

Some have described Georgia Pellegrini’s book as a ‘how to’ guide for those wanting to pursue their own food dream. However she’s a realist and acknowledges that, ‘not everyone is going to go off and breed potatoes or churn their own butter.” But her book instead, ‘is meant as an inspiration, as a metaphor for what’s important – it encourages people to step off the grid once in a while. Whether it’s baking your own bread or making your own butter it’s an important thing to do and remember.” This is definitely something we would be wise to consider. Especially when you consider the challenges that Pellegrini’s food artisans face from the massive corporations that we all happily pour our money into each day.

‘The food artisans struggle to get people to see the value in the difference between something that is made on a small scale level that is really high quality and tastes much better…to get people to see that it’s worth spending just a little bit more in order to support the idea of doing things the old school way and preserving traditions. Ultimately those are the things that are important to learn”. It is this idea of preserving traditions that has stuck with Georgia since her childhood in the Hudson Valley, growing up on the same land as her grandfather. Tradition is clearly important to her and what turns her book from a publicity brochure to an affecting and informative read.

Does Pellegrini ever consider what her life would be like had she not forfeited her career in the city? ‘If I wasn’t cooking I’d be writing if wasn’t writing I’d probably be cooking in a restaurant – I’m doing so many different things right now so I’d probably be doing one of them.” She’s not wrong. Next year Georgia is due to hit the TV screens Stateside as ‘Girl Hunter’, with a program chronicling her adventures with a shotgun.

‘It’s been slow going but I’m excited. I think it will be great when it finally happens there are so many things I’m learning as I go.” And with the shooting season in the UK starting up she’s even been able to get a bit in whilst over here – though wisely decided to leave her own gun at home. ‘I was hunting for Pheasant, woodcock, duck and pigeon at Conington Hall. Yesterday was thanksgiving so I got some friends together and made a feast of two woodcocks, two pheasants and two pigeons, it was great fun” Recipes are on her website if you find yourself in need of a way to dispatch a pheasant or two!

It sounds like Georgia’s caught the shooting bug, but in truth she’s quite unlike a lot of the hunters out there. ‘I hunt for food so I’m not like a trophy hunter who does it for the horns.” And since bigger game is not exactly practical in terms of freezer space – bear burger anyone – she sticks to the smaller animals. Her biggest triumph to date converting what everyone told her to be an inedible pig that she’d shot in Texas, into a mouth-watering meal.

‘You have to think about the animal and the kind of life it has had, what it’s eaten – all of that affects how you cook it. You’ve got to really get into the animal. You can’t just go to the grocery and get your boneless skinless chicken breast and be done with it – you’ve got to roll up your sleeves”. It’s this attitude that has seen her become far more sensitive as a chef. ‘When you’ve spent four hours plucking a duck and burning off the pinfeathers, or hair or fur you really don’t want to waste it.”

It looks like Georgia Pellegrini is here to stay, global forager and hunter extraordinaire. Subverting our hunting stereotype and turning on it’s head any preconceptions about pretty girls with guns. ‘In this day and age there is no reason why a women can’t do it as much as a man. In my opinion women are in fact a better shot because they are more patient.” Well you heard it here first; time to take out the 12 bore.