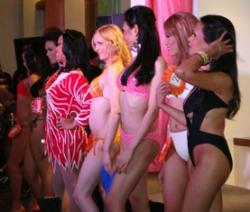 Surreal, bizarre, compelling and of course, fun, all aptly describe this event, which took place at Mango Tree on Sunday 13th September.

This annual, camp and colourful competition has been running now for seven years, and we watched as eight competitors, representing different countries, battled it out over three rounds: creative costume; swimwear and evening wear, to get their hands on the 2009 Mango Tree Ladyboy crown. The competitors pulled out all the stops, having preened themselves to within an inch of their lives, parading in front of the panel of judges, including Gabrielle, invited guests such as Dame Kelly Holmes, and Beverley Knight plus a room full of excited customers. Our competitors posed, pouted and smiled like their lives depended on it in their quest to take the title and win a clutch of prizes including flights, cash and a pair of handmade Jimmy Choo shoes.

While we watched the extravaganza, sipping on our chilled white wines, Mango Tree’s efficient waiting staff brought tray after tray of lovely canapés. These included such delights as croustades filled with prawn in a cocktail sauce, shredded duck, and very tasty spicy diced vegetables, there were also crostini topped with pork with a dab of tangy suace, breaded and deep fried chicken strips and skewers of chicken with a satay sauce. These delightful bite sized little gems were all lovely, much as you would expect to come out of the Mango Tree’s kitchen, and great to nibble on as we enjoyed the spectacle.

As the evening drew to its climax, the top three were announced in reverse order: Third place went to Miss Angela Cotton from Puerto Rico; second, was Miss Cream, from Thailand, then after a suitable pause, the winner was announced. Well, let me tell you, competition had been very tight, so the crown could have gone to any of the six remaining competitors, but this foodie hack managed to predict the eventual winner at an early stage. Yes, it was Miss Garcia, from Venezuela and amid much excitement, we then watched as she was crowned surrounded by a battery of flashing cameras. Sadly, by this time it was getting pretty late, so rather than stay and be part of the celebrations we eventually had to dash to catch the last train home. The suburbs can be so limiting!

The Mango Tree Ladyboy competition is great fun and well worth looking out for next year. Its very entertaining and surprising how easy it is to get caught up in all glitter, glamour and the partisan whooping, as individual favourites take the stage. Look out for it next year it’s great fun.