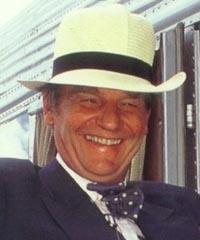 Keith Floyd suffered a heart attack and passed away last night, aged 65. Some may say his penchant for excessive drinking may have cause his death, but he fought a long battle with bowel cancer which inevitably contributed to his weakened state. Much irony lying in the fact that his death coincided with the airing of a one hour documentary on Channel 4 last night named ‘Keith on Keith” – interview conducted by Keith Allen.

Keith Floyd was by and large one the most colourful characters to ever grace the screens of our nation. Some would say he was nothing but a drunk, but I would say this couldn’t be further from the truth and that he was actually a great Chef indeed and although he was fond of a drink, he was nothing less than an eccentric ‘Bon Viveur’ that spoke his mind.

Hitting our screens in 1984 with ‘Floyd on Fish”, Keith Floyd opened up a whole new world of food and culture to us, long before the likes of Gordon Ramsay were around. Lovers of Floyd could not possibly forget the infamous episode of where he attempts to make ‘Piperade’ (a typical Basque dish of peppers, onions and tomatoes) for a restaurateur, who proceeds to insult his effort in French on camera, whilst he translates each one of her verbal assaults into English for the viewing public. Who can forget his blazing on-camera rows with his long-standing producer David Pritchard, who could give as good as he got, but almost never had the last word in any argument with Floyd. Their love/hate relationship was almost integral a part of the shows as the cooking, though perhaps predominantly booze-fuelled in most instances.

Love him or hate him, most of us tuned into watch him and personally, I grew up watching him on TV and am extremely saddened by his passing. Perhaps by today’s standards, he may not have made the grade as one of the best Chef’s around, but he was a legend in his time and with his loud voice, wine-fuelled antics and culinary flair, he earned a place in our hearts and minds and we will miss his him dearly.