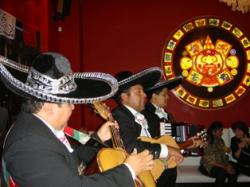 Mestizo’s Gastronomic week was launched on Monday with a bustling party. Assembled guests included a member of the House of Lords, dignitaries from the Mexican Embassy, friends, yours truly and other representatives from foodie medialand. A Mariachi band and Mexican dance troupe entertained us in a lively set; it was a vibrant, fun evening and a great way to kick off their Gastronomic Week.

Guests enjoyed a range of drinks including a very good, slush puppy style margarita, which was bursting with flavour and all too easy to drink – having worked through three, we moved on to wine thinking that it might be a little less strong. During the evening, waiting staff brought around trays of canapés representing dishes from the ten Mexican states, too many to mention and describe fully here, but they included: crisp patties filled with prawn and a tomato based sauce; slow cooked strips of pork in a tasty white sauce in little tartlets; similar tartlets with a white fish that had a zingy lime and onion dressing; tasty shredded duck rolls and more.

The Gastronomic week at Mestizo runs up to Mexican Independence day on 15 September. During the week, the restaurant will be featuring dishes from each of the Mexican states. The week culminates on Mexican Independence Day, 15 September, with a special menu featuring traditional Mexican specialities. For those of you with the stamina, the 16 September will be ‘Curate la Cruda’ (cure the hangover) which promises to provide a great chance to wind down and relax.

If the canapés served at the launch party are representative of the dishes that will be featured during the Gastronomic week, and the atmosphere created at the party is anything to go by, this promises to be an interesting, fun week and something not to be missed. You can find out more about Mestizo and the Gastronomic week through their website, using the link above. Have a look, go and sample the cuisine, you won’t be disappointed.