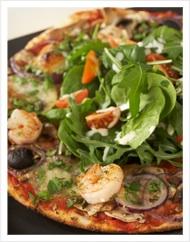 Did you know that the atmosphere on earth is proportionately thinner than the skin on an apple? Did you also know that 10% of diners at Pizza Express customise their pizzas? Two amazing facts, dear reader, but the latter is particularly significant as it gave those marketing geniuses at the ubiquitous restaurant chain a cunning idea, an idea so cunning that the basement of Pizza Express on Charlotte Street was opened up for the press and bloggers to experience it for themselves.

‘Create your own pizza’, rather like ‘create your own salad’ in a garishly decorated branch of Tossed, is an imperative that usually fills me with feelings of futility and resentment; why should I lovingly conceptualise some delicious dish when I hitherto assumed that expertise was included in the bill?

A cunning idea, however, it has proved to be, as 22,000 people have already submitted their recipes to Pizza Express headquarters and faced, as I was last night, by rows of trays containing almost every topping used by the kitchen staff, it was difficult not to experience the same flicker of enthusiasm.

With slight contempt for those of the party who had specially requested chocolate and banana for their concoctions and a blithe disregard for the advice that ‘less is more’, I daubed lashings of everything delicious over my tomato-smeared base; olives, artichokes, roast vegetables, cheese and meat. A sprinkling of dried oregano was pure theatre. As the waitress took my objet d’art to the oven I noted a discernible wince, one of either profound jealousy or earnest pity.

The conclusion reached having sampled my culinary opus was not such an amazing fact; the individual ingredients on my creation tasted great but not particularly complementary to one and other and my dreams of winning the competition were over. Pizza Express believes there is a genius out there somewhere, however, and where one falters, another must conquer. To be in with a chance of £5,000 and your idea on the Pizza Express menu, submit your recipe either online or in a restaurant by the 13th of September. More details at