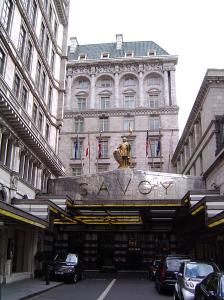 The Savoy, A Fairmont Managed Hotel, will reopen its doors on Sunday 10th October 2010. One of this year’s most eagerly anticipated openings, The Savoy has been undergoing the most ambitious restoration in British history. The hotel closed in December 2007 for a restoration that encompasses the entire building, from the iconic entrance and the American Bar to The Savoy Grill and the 268 guestrooms and suites.

‘We are very excited to reopen The Savoy,’ said General Manager, Kiaran MacDonald. ‘It is fair to say that this project has not been without its challenges, but we are looking forward to unveiling the results of nearly three years of hard work and dedication. We are very aware of the place that The Savoy holds in many people’s affections and we firmly believe that the hotel will exceed people’s expectations and reclaim its position as one of the world’s great hotels.’

The new interiors have been designed by world-renowned designer, Pierre Yves Rochon who has won acclaim for his work on other landmark hotels. His plans have been realised by the general contractors, Chorus Group and architects, Reardon Smith. Chorus have overseen a team of over 1000 craftsmen and women, artists and artisans who have worked tirelessly to create interiors that are in the spirit of the hotel’s two main design aesthetics, Edwardian and Art Deco.

‘This has been a once in a lifetime project to work on,” says Tony Dowle, Director of Chorus’ parent company, Byrne Group. ‘Everyone who has worked with us at The Savoy has taken great pride in restoring such an iconic property. Their dedication and commitment has produced a hotel of uncompromising quality and we hope that the hotel’s guests will continue to enjoy our work for years to come.’

The Savoy’s reopening will reveal a number of notable highlights including the complete remodel of the legendary River Restaurant, the addition of a luxurious new two bedroom Royal Suite and the re-launch of 38 River Suites and Guestrooms with stunning views over the River Thames.