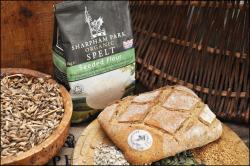 He may not sound like the obvious choice for expounding the virtues of the most recent super-grain to hit the mainstream, but Roger Saul, founder of handbag brand Mulberry, couldn’t be better qualified. Back in 2005 he swapped his Bayswater for something a little less qualified for the catwalk…spelt flour. He and his wife took on a 300-year-old farm in shooting distance of Glastonbury tore, and have spent the last six years cultivating organic spelt and introducing rare breeds to the historical landscape.

What was born was a range of products that are both incredibly delicious and also massively beneficial to our bodies. As well as lowering cholesterol, increasing zinc and iron levels, giving us a good dose of Riboflavin, they (and this is the really good bit) are an excellent option for those with wheat intolerances. With its alternative molecular structure, spelt’s protein molecules are shorter and more brittle, making them easier for the body to digest, a bonus for everyone’s bodies. It’s always nice to know that what you put in to yourself is good, but most importantly it must be tasty!

Spelt has a delicious almost nutty taste and its small grains make it the ideal alternative to rice, though one of my new favourite things is a handful of pearled spelt thrown into soups and stews. And what better way to start the day then with yoghurt topped with one of their scrummy granolas. For me though, the main attraction of the range is the broad selection of flours. Good bread is the holy grail of foodstuffs. I like it crusty, chewy and slathered in butter. I’ve not got a wheat intolerance, but a bad bread intolerance, if you like mighty white you need to look up bread in the dictionary. So when I heard about Sharpham Park, I thought I ought to use my loaf and find out whether it would stand up in the oven.

Baking guru Dan Lepard has already given Sharpham Park his seal of approval but could an amateur baker like me compete? I started off with simple Soda Bread; quick, easy and usually one of my favourite breads. I was not disappointed, following their instructions (there are recipes on the website) I used a combination of the white and the wholegrain flours, which added a lovely depth and earthy flavour to the loaf. It rose beautifully too, doubling in height and produced an impressive loaf. Full marks so far. I’ve made bread before, even going through a sour dough phase at university – cool kid – so I went all out with my next attempt. 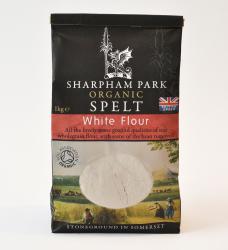 After hearing various spelt tales of woe, I opted to make a starter, which I heard could improve its overall texture. So twelve hours later, one bubbling bowl and a lot of flour later and it was on its way to being my breakfast. Because of the protein structure of spelt flour it requires less kneading, and also proves in less time then standard wheat bread. Excellent news for bakers in a hurry and tired arms. It was therefore not long before the loaf was ready for the oven and I was lining up the jams in anticipation of the finished product. As tempted as I was when the smell of bread filled the air, to plunge straight in with a butter pat, I restrained myself. Cooling is pretty crucial for bread and many a time I’ve berated my lack of patience.

Finally knife in hand I sat back with the fruits of my labour, the bread was denser then a standard wheat loaf but the flavour was cracking. It also left me feeling replete and satisfied by the fact that I was eating something whose credentials more then satisfied the Gillian McKeith’s of this world. Looks like Roger Saul has done it again…and you don’t have to pay £800 to enjoy it!