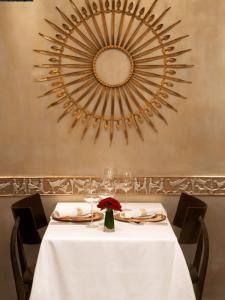 As spring flitters into summer, as blues jitter into yellow, as I splutter into my licorice tea (how many years does it take to finish this box?), it’s time, I think, for Tamarind.

The Michelin-starred subterranean Mayfair restaurant has launched its spring menu, and not a twig of licorice in sight, apart, I guess, from the fennel seed spicing. At the moment there’s a lunchtime deal where you can get three courses for £18.50, £28.50 with wine, if you fancy.

We started with sesame-coated cakes of minced vegetables with dried mango and toasted coriander seeds. Parked on a tamarind chutney, they were a bit mulchy – yes, I know they were mince – but even a random carrot cube would have been engaging. The absolute best was the pan-fried tilapia filets with ginger, paprika and curry leaf topped with a honey and yoghurt dip. These were delicate and considered, the spicing fragile in its rawness. The yoghurt was a good shock to the tongue too, cool and silky against the rough, gravely spice.

I liked the bottle gourd with onion and tomato-finished baby spinach for its simplicity. For a Michelin-starred restaurant, what a refreshment to taste a memory of home-cooking, confident, this is, and assured. Our waiter brought out a bottlegourd – like a marrow – for us to ooh and ahh over. Exclamations over bottlegourd rule in Mayfair, honest, guv. The tandoori salmon in a ginger, chilli, yoghurt and dill marinade was well-cooked and pinky though the braised lamb cutlets in browned onion sauce with mace and saffron were a little tough. Beautiful warm carrot and ginger pudding though – both very Indian ingredients for sweetmeats, nicely adapted for a western palate – should you need to adapt.

These were matched with wines, my favourite being the Infamous Goose Sauvignon Blanc which tasted, I’m guessing, like a lichen-lined barrel of apples into which perhaps a feisty frog had fallen. Or the infamous goose. Countered the spicing nicely and soothed me back out into the summer’s day.