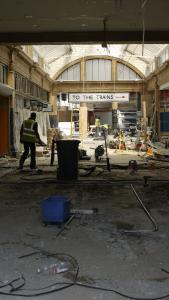 Infamous as a nucleus for themed pubs and the blandness of its mall, Fulham Broadway finally looks set to receive some good quality, gastronomic gentrification.

Occupying the grade II listed ticketing hall of the area’s former railway station (most recently home to TGI Fridays), ‘Union Market’ is intended to combine the ‘theatre and authenticity of popular farmers’ markets with the convenience and reliability of supermarkets’.

Scheduled to open in July, it represents the company’s first such store.

According to the firm’s mission statement, there will be always be specialised personnel on hand to dispense advice: ‘We will have farmers, chefs, suppliers and trained staff to enthuse and explain about the various links in our food chain…’