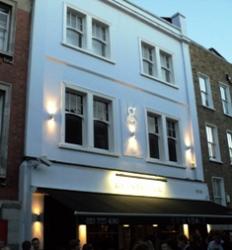 We arrived at the launch party for The Lonsdale rather later than we had intended, it was after 9.30 and all was in full swing, young and not so young, west Londoners were spilling out onto Lonsdale Road with colourful cocktails and beers in hand, taking advantage of the warm evening and of course the freedom to smoke out there. I normally like to get to these things early, as it gives the opportunity to take a good look around and snap a few pictures before the place is too full of people, it wasn’t possible this time because of other commitments.

Having arrived we made our way in and found that a space had been reserved in the bar area for media types, so we sat there and soon after were each holding a nice glass of chilled champagne. We people watched and took in the atmosphere as the DJ played his stuff just a little more loudly than it would have allowed us to talk at a reasonable level without straining to hear and be heard. Now I know that you are all going to say I’m an old fogey – does using that word make me one anyway? But, having to ask people to repeat themselves two or three times can get a little wearing. Anyway, I suppose that if this was all an indicator that the place will be a vibrant and buzzy place to go to eat, have a drink and spend an evening, it was effective in doing that.

The Lonsdale stretches back deeply from its entrance, which itself has a patio style seating area. As you walk in there is a discrete seating area that would comfortably sit some 12 to 20 people, a long bar stretches beyond that with more seating opposite and further in there is a large dining area. The decor throughout is striking and colourful, with some interesting use of materials.

We didn’t manage to sample much of this new gastro pub’s food, we had apparently missed most of the canapés as they had been circulating before we arrived. However, one canapé that we did taste was the deconstructed beef wellington – a slice of medium rare beef sat on top of some mushroom puree some sauce and resting on a crisp base – and this was very good. The meat was nicely tender and it combined well in the mouth. Given that The Lonsdale’s main focus will be its steak, which we understand will be sourced from a local quality butcher, this was indeed a good one to sample.

With time limited for returning to deepest south London, we only stayed for about 90 minutes in total, but in that time we also managed to sample a recommended elderflower martini, which we liked; it tasted strongly of elder, though it was a little sweet for us. We then, true to form, asked for straight dry Hendrick’s Gin martinis which were perfectly executed – both by the barman and then by us, I might add.

From what we saw, The Lonsdale looks a pretty vibrant addition to the area. Their menu looks interesting and although it has a steak focus, there is a good range of other options and they are reasonably priced. They also have an extensive range on their cocktail menu as well as an incredibly well stocked bar. It certainly looks like a great place to go, have a cocktail, eat and then stay on to enjoy the atmosphere.