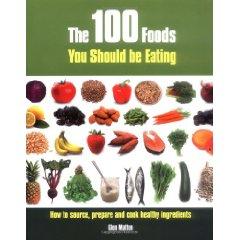 So it’s a nice surprise to find that Glen Matten isn’t actually some hair-shirt food activist or bossy upper middle class food snob. He likes food that is bad for him just as much as anyone else and he isn’t about to stop eating it either, but he does realise that it has to be in moderation. And here is his counter strike for health

These aren’t 100 foods that promise to make you lose weight, become more attractive or help you to live forever. This is simply good advice on foods that will make you a bit healthier, a bit more lively and with better digestion.

As he points out in his intro, the book’s title says it all. Plus there are tips on sourcing, buying, preparing and cooking as well as a recipe or two for each ingredient.

The structure is useful; it’s not laid out as a 100 list. Instead we get Breakfast, The Munchies, Lunch on the Go, Strapped for Cash, Summer Living, Friends Round, Fast Food, Lazy Sundays, Kids, Desserts and Drinks. Not bad for a thin book that costs just £9.99.

It’s actually a better recipe inspiration book than many a chef’s weighty work of wisdom. The focus on one major ingredient per page makes it easy to browse and just opening it at random can yield pleasant surprises. Looking at Broad Beans, because the book fell open on the page, I learnt the three things that Glen says about every item – Why we should be eating it, How to buy it and How to cook it. Then there was a Pearl Barley risotto with broad beans and mint that sounded rather delicious.

Another page yielded Spelt, that ancient of grains. A spelt bread pizza with goats’ cheese, black olives and wilted rocket sounded pretty good to me. Surprisingly I also found Beef. No apologies for it, instead a reminder of why meat is actually good for us, providing lots of important things in one package and a further reminder not to eat too much of it. Fair enough. And the Pot Roast Beef and Ale recipe sounded just the thing for Sunday.

Chirpily written packed full of useful information, clearly explained, and with 100 tempting recipes, this unassuming book can hold its own with the glossy fantasies we’re more used to seeing. It has practicality at its heart and it wants to help you look after yours. What’s not to like about that?