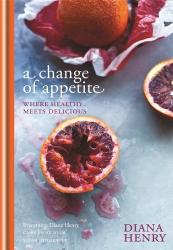 A new cookbook from Diana Henry is always something to look forward too. She is one of the few cookbook writers who doesn’t rely on chef fame, social media savvy or trend chasing to succeed. She is certainly bucking a trend with this book.

While scenester foodies flog books on’dude food’ and other heart-stoppingly boring and fatty food fads, Henry is going the other way.’Less meat and heavy foods, more vegetable, fish and grain based foods,’ she says.

This is not a health cookbook thankfully but instead full of recipes that could be said to be’good for you’ or at least not bad. Henry calls it’accidentally healthy food’, the kind of food you enjoy eating and only afterward reflect that it was virtuous.

Nothing is off limits, there are no lectures, she enjoys a steak with Bearnaise sauce as much as anyone but she is not slavish. Except perhaps about sugar and refined carbohydrates, which she urges us to avoid when possible and few people, except teenagers, would disagree with that.

Her thinking on food leads her very much down a Middle Eastern path, which for much the same reasons is one I’ve been ambling down myself recently but mainly out of boredom with European food and its pretensions and often curiously reactionary nature. Middle Eastern food has front of mouth flavour and a deep love of generous quantities of fresh herbs and comforting grains.

Henry makes the often overlooked point that calories are not equal. Highly processed and refined carbohydrates are processed by our bodies differently to fish and green vegetables causing blood sugar and insulin spikes and insulin basically makes us fat.

The book is divided by seasons, as so many are these days, so we begin with spring and a Persian salad that is almost all herbs and edible flowers. If that’s a bit meat -light then Persia also offers a smart-sounding saffron and mint chicken with spring couscous.

Beetroot, radish and goat’s cheese salads; leeks with yogurt, dill and sour sumac; rice paper rolls with nuoc cham; spring barley couscous with fiery harissa and a buttermilk sauce and a mouth-watering dish of jersey royals with purple sprouting broccoli, quails eggs and anchovy cream. Dishes that delight the eye as well as the tongue.

One of the pleasures of any Henry book is the writing around the recipes – learned in a light way, gently humorous, unpretentious and often self-mocking. T

The subject matter means that time spent reading the book on the commute is time well spent and you come away with a resolve to eat better, but enthused by the idea that better needn’t mean boring. As Henry says,’this is good food for people who love eating. It’s a happy bonus that it’s good for you too.’