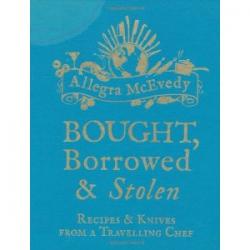 I’ll get the negatives out of the way first. This is possibly the most irritating cookery book I have ever come across. Allegra McEvedy is as garrulous on paper as she is in person – a stream of consciousness spills over every page and, for me, it gets in the way of the recipes.

I’ll open the book at random to show you what I mean. Page 78: Chinese Confit Duck with Noodles. ‘Blend the salt, fennel seeds, cloves, chilli flakes, star anise and Szechuan peppercorns in a spice grinder/food processor until coarsely ground, or if you’re a real masochist pulverize them in a pestle and mortar.” Thirty-four words to say what other writers might suggest in six: ‘Coarsely grind the first six ingredients.”? Wouldn’t you know you could do this in a spice grinder or food processor – or with a pestle and mortar? Do you need the semi-sense of humour to get you through the task?

Or take this: ‘Sprinkle a quarter of this mix on to the bottom of a roasting tray …” Would you have sprinkled it on the edge or underneath? How about ‘When you are ready to get going, preheat the oven …” Would you put the oven on before you were ready to get going, perhaps before leaving for work or to meet a friend? Elsewhere I read an instruction to stir something with a spoon. What do you reach for when a cookery book advises you to stir something? A knife? A pair of scissors? A jar of pickles?

Secondly, the photos are possibly the most unattractive depictions of food I have ever seen. They make the dishes look as if they have been cooked by drunken students, without any thought of presentation, then snapped using out of date film in a camera so complicated it was impossible to choose the correct setting. Allegra’s concept for the photos is fine enough: to capture the spirit of the country by putting plates or bowls on sheets of the region’s newspaper or a collage of local bits and bobs. It’s the quality of the photos that lets her down.

Third – I’m sorry to go on like Allegra – she makes simple acts complicated, faffing unnecessarily when others would be more straightforward. With the High-Kicking Quail Slow-Cooking Lentils, the lentils started off on the hob until the wine had been reduced, moved to the oven to cook in the stock, then came back on to the hob to reduce the stock. It could have been done on the hob throughout.

Which is what I did and this is where the positives come in. It was delicious. I will use this recipe for lentils as a staple – though without the unnecessary multi-locations for cooking them. Picking other recipes to try will be harder. The photo for the quail with lentils was one of the best in the book. Others look unappealing and, if mine were to look similarly, I wouldn’t want to show them off.

As for the stories behind the recipes, I’m afraid it’s another negative: the tone is self-indulgent. The idea of building a cookery book around the knives Allegra has collected during her travels sounds intriguing – and some of the stories are interesting – but there is too much of an ‘it’s all about me” air. Other cooks and chefs – Rick Stein, Joscelyn Dimbleby, Anjum Anand – take you there without intruding.

As is often the case with cookery books written by chefs, the timings are way out. Even if you have excellent knife skills and just-sharpened knives, it’s impossible to work as quickly as someone who has honed skills at restaurant speed for years. The lentils took half an hour longer than specified and the quail was still bloodily cold after the eight to 10 minutes she recommended. The delicious sounding rabbit lasagne, in the Cuba and The Caribbean chapter, takes one and a half Allegra hours to prep. I’d allow two and a half hours, not including the time you’ll need to keep finding your place in, and read, the 700 or so words of waffling instructions (you’ve read 700 words if you’ve read to here – see what I mean?).

With over 350 pages, it’s a massive book – heavy, bulky, too cumbersome to read in bed, awkward to hold while sitting in comfort on a sofa, making it un-pick-up-able rather than un-put-down-able. Part travelogue, with fact files for countries to set a context, it takes you on Allegra’s travels through 18 countries, eating what she ate. It’s an eclectic – some might say weird – mix. Don’t expect to find recipes for the national dish of each country she’s been to. Her collection of knives is, however, enviable.