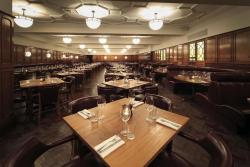 The creamy, jellied, glistening bone marrow sits staring at me accusingly. ‘You ordered me, now eat me’, it says. It is 8am and I am at Hawksmoor Guildhall. Everything else here is pretty much as it should be; coffee, fried egg yolks running lava-like over bubble and squeak in a thick HP gravy.

In any other situation I’d happily gobble the marrow down. But here, now, I’m not entirely convinced it was the right decision. Don’t get me wrong, it is nicely cooked and, eaten with spoon, the consistency is not unlike a well boiled egg. But I’m not sure I’ve had this little gift from the meat Gods at this hour before. I only got out of bed an hour ago.

The basement dining room in the belly of a beautiful building in the City is not unlike my old posh secondary school’s – a vast room decked out in wood, full of character but without the lumpy custard and satchels. Oh, and we never had lovely leather booths, either. It is quiet and we are the only ones here apart from a couple of food bloggers sat a few tables down.

The menu is a City gent of a list, well dressed, debonair. In fact, it’s a Death Row read of would-be last-breakfast favourites. Just about every base is covered. Full English? Check. Pancakes? Check. Kippers? Check. Steak? Check. A, the only dining companion I could find willing to set her alarm earlier than usual for this greedy breakfast, nearly orders granola. I nearly kill her.

The steaks, for which Hawksmoor is most usually associated, are offered with fried eggs and hash browns and as a 200g fillet (£25) or a 250g rib-eye (£21), although other cuts are also available. The pig though, is king on this menu, which has a little gumpf about the Plum Pudding variety they use here – an English slow-growing breed that ‘has much more flavour than its commercial cousins and with a healthy coating of fat’ apparently perfect for bacon and ham. There are a number of egg options (fried, Benedict, Florentine, soft boiled, scrambled or omelette, all priced between £6-£10.50), doughnuts, breakfast sarnies, pastries, scotch pancakes and a massive Hawksmoor breakfast (for two to share at £35) of smoked bacon chop, sausages, black pudding, short-rib bubble & squeak, bone marrow, trotter baked beans, fried eggs, grilled mushrooms, roast tomatoes, toast and gravy. If you don’t want anything here, then you probably don’t want breakfast.

I also notice, through bleary eyes, that there are a couple of ‘anti-fogmatic’ cocktail options and Bloody Marys alongside juices for the faint-hearted (or non-winos). A and I drink coffee – one new addition to my breakfast repertoire is enough for one morning.

Hawksmoor Guildhall is open for breakfast Monday to Friday between 7am and 10am.