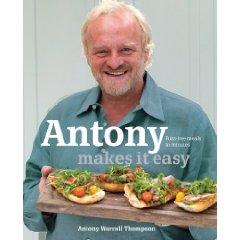 Once, children, there was but one cookery programme on the TV and it was called, rather unimaginatively, Food and Drink. Presided over by Queen Jilly Goolden and a couple of other queens too, it ended in 2000 and was lost to the mists of time. Today it all looks rather quaint, like footage of pre Second World War sporting events.

Some of the presenters have died or gone to specialist TV channels, which is much the same thing really when you think about it. However Antony Worrall Thompson, one of the earliest presenters, has survived well in mainstream visibility if not always financially and has also had the dubious honour of being slagged off by Gordon as ‘a ****** telly tubby.’

Now that Gordon comment illustrates the gulf that exists between so called ‘proper’ chefs and the ‘TV Chefs’. The former look down on the latter and yet seem happy enough to take the money when it’s offered. And when it comes to cookbooks there is a clear divide too. Proper chefs write books that are designed to fix in time their recipes and their methods, as well as make personal artistic statements. What they are not designed for is to be used to make food. Not unless you yourself are a master chef. They look good on the shelf though and impress your guests.

Now Tony’s is not that kind of book, there is a good chance that unless some kind of idiot, you can make every dish here. I tried a couple and they came out rather well, and I’m no genius at the stove.

It’s called ‘Makes it Easy’ and in the intro Antony makes it clear that easy and fast are not synonymous. It’s easy to make a stew, but you won’t be eating it ten minutes after starting it. He’s keen too that these recipes are suitable for kids, not dumbed down food, but food they will enjoy. And as he rightly says, the sooner you get children used to new food and experimentation, the better for them. This is all food that isn’t placed in towers, and no foams gush over your plate, it’s family and friends food.

He goes from Breakfast to Dinner with Lunch in between – no mention of the word Supper thank goodness, what a conceited, aspirant middle class concept that is. He takes in Vegetables, he does some Puddings and he has chapters on Hot Sauces, Cold Sauces and Dips, Salad Dressings and has a useful Store Cupboard section.

Each recipe has a pictogram at the top telling you at a glance the prep time and cook time which is very handy as is the ingredients divided into what you should already have in your store cupboard and what to go out and get.

The book has lots and lots of really rather good dishes. They aren’t all fancy, many are simple but satisfying and all have been carefully written/edited so all are easily understandable and don’t leave you stranded going ‘what the hell?’ half way through.

Over 120 recipes, including Ultimate Pot Noodle, Moroccan Salad, Cauliflower and Courgette Fritters with a Gorgonzola Dip, Pork Escalopes with Spicy Butternut Squash, Asian Squid Salad, Miso Chicken with Emerald Vegetables, even Fish Fingers with a Coconut Twist – the Telly tubby knows what family food is all about.

All good, fuss-free recipes that make you hungry but won’t make you stressed. Antony does indeed make it easy.