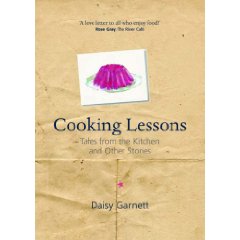 It’s really rather hard to get a handle on this author. She comes across at first as the usual boarding-school educated, Catholic, upper middle class girl who thinks the correct term for the evening meal is ‘supper’, is rather inclined to be matrician with the housekeeper and has swanned through life in general. So far then this book is ideal to give as a present to your aunty this Christmas. Then suddenly, about twenty pages in, she uses the F word for no good reason. It’s a bit like finding a hair in your soup; it rather puts you off the whole thing. No doubt her editor may have suggested she take it out, but these sorts of writers only dig their heels in on such occasions and, to prove a point, do it again and again. The numerous spelling errors in the text that are left uncorrected are perhaps the editors’ sly revenge

So Elizabeth Luard she definitely isn’t, not with all the rather self-conscious effing and blinding that punctuates the pages. She is however, as she sets out to be, fairly cheerful company on the voyage of discovery that is learning to cook at thirty, And appropriately enough, it’s in a boat that she takes her first faltering steps as she crosses the Atlantic. The book begins there and Daisy shares what she discovered about roasting a chicken as well as other things that most of have to find out about a bit earlier in life, to be honest. The book then goes back to her early days of having a great time in New York with doors being opened for her everywhere as she enters a circuit of parties where all the right people can be found, (her mother, Polly Devlin, was Features Editor of Vogue which may have helped). Here fabulous people pass on recipes and introduce her to even more fabulous people. Then she comes back to London on the boat and settles down to meeting all their UK equivalents.

As a compendium of tasty recipes and tips and tricks, it’s all very useful, but probably nothing you couldn’t learn from delving into a Good Housekeeping book. Aimed squarely at the class who sniff at Delia Smith, but who roll over for Ruth Rogers and Rose Gray, it doesn’t float my boat at all but will no doubt feature on many of the reading lists her friends will be compiling for the New Year’s Sunday supplements and arrive in many a stocking.