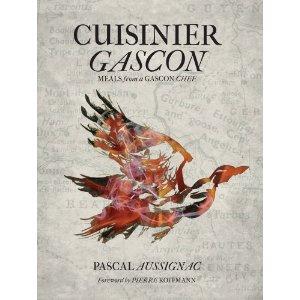 I’ve met Pascal Aussignac a few times, he’s a nice man and not at all cheffy. Some people like their chefs to be like rugby prop-forwards in a toque, I like mine to be a bit more sensitive. Mind you I always hid in the library during games afternoons at my school.

Pascal’s cooking is not poofy though, far from it. At Club Gascon, his Michelin Star restaurant in Smithfield, he cooks manly and butch grub from Gascony in tapas style sizes. Big flavours from South West France. Regular as clockwork the anti foie gras protestors appear on his doorstep, preaching their message of hate. Not so much methinks because they love geese, but because they don’t like rich people eating expensive food. Pascal ignores them; he is a chef not an activist. Foie Gras is crucial to Gascony cooking

Gascony itself is scenically and gastronomically a diverse region. Down south there are the Basque Pyrenees, up north there is Bordeaux, as a region it no longer exists administratively but it lives on in peoples’ memories as a province of troubadours, food, wine and song.

This is cuisine de terroir, of the land, and Pascal remains true to that ideal but gives it a twist. This means making it a bit lighter for those of us not about to go out and work in a field after lunch. A real Gascon meal, cooked in duck fat, would lay most people out for a week – we simply don’t burn energy like we used to.

Every dish is a flavour feast and the photographs, both of food, people and places are excellent. Nice to see too that for once the pictures aren’t by Jason Lowe but by Jean Cazals – nothing wrong with Jason, but sometimes it seems that he is doing every food book there is.

Some pages fold out to become three page spreads when the recipe or story demands it and the whole book can be enjoyed as a ‘read’ as much as a cookbook. The recipes can be demanding, you need to be quite a keen cook to make a pig’s trotter cake, but on the other hand his recipe for frites is simple enough if you splash out on the required duck fat.

Many dishes are light, such as the cappuccino of black pudding with lobster and asparagus, or a Portobello mushroom confit, but all are very tempting. Pascal has five restaurants in London, all Gascon influenced but all a little bit different and this variety is reflected in the book which is sumptuous and packed with 100 recipes.

With a foreword from Grand Master Pierre Koffman, this is a real celebration of real food – it can look pretty but it never sacrifices visual appeal for visceral satisfaction. Get greased up with some duck fat and dive into this unique collection of taste and terroir.