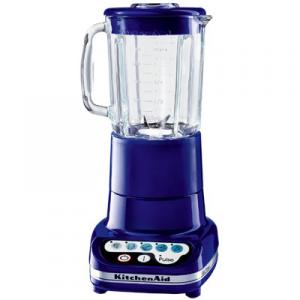 An Artisan Blender is not, of course, a machine for blending artisans. For one thing their pigtails wouldn’t fit in and their roll-ups might cause problems. No this is a blender for Artisans in the same way that the James Martin Blender we tested was, according to the box it came in, suitable only for Executives. Funny how marketing works isn’t it?

This is, it has to be said, a serious machine now uprated to have more powerful motor and larger, thicker, glass goblet but otherwise not really different from previous models. You could almost call it an Industrial Blender because it’s built to take heavy use and come up smiling. Just like its very desirable cousin, the Kitchen Aid Mixer, it’s made from steel girders and kryptonite and the man who delivered it walked up the drive bent double under the weight.

It is in essence a very simple machine; we’ve all used blenders before. The motor drives spinning blades in a glass goblet and whatever’s inside gets mushed. What distinguishes the Artisan blender is its construction and performance.

Firstly the goblet can be sat on the motor base at any angle. There’s no need to carefully line up base and goblet and then fiddle to get it set down and the safety locks engaged. This is crucial in a busy kitchen – with the Artisan you just drop the goblet on to the base one handed and its own thick glass weight serves as the safety lock.

Secondly the blades are very high quality steel and very sharp. Most blenders have blades made from old Coca Cola tins and they couldn’t cut butter after a few weeks use. The Artisan’s can cut up just about anything and remain sharp and unbent. In fact the patented stainless steel blade is positioned on four different planes for fast, thorough blending and this is also why the machine has more buttons than the average blender.

It has five blending functions: stir, chop, mix, puree, liquefy and crush ice and on test it did the latter very well. There was a noise like the end of the world initially, but that was only to be expected. After a minute though the noise dropped to indicate we now had a big bowl of crushed ice. This feature means the machine is a great device for making cocktails all in one place (it has a special ‘cocktail’ button) and that’s why you’ll often see one set up in bars. The very effective non-slip feet must come in useful too, you only want to see customers dancing not your equipment.

The machine also does a good job on ‘grating’ cheese. It reduced a block of parmesan to grains suitable for topping my cannelloni in seconds. It does an even faster job on cheddar. It makes short work of onions and other veg too and this is where the real genius bit comes in.

Most blenders don’t have removable blades. This makes cleaning out those bits of vegetable stuck underneath a real chore, but the Artisan is different and the whole base of the goblet comes away to give absolute simplicity of cleaning. With the base and blades off, it’s totally dishwasher safe. That alone is worth the price.

Also worth the price is the slow start feature, which as it suggests means the blades don’t go full speed immediately but up from slow to fast. This in turn means you don’t get the surge spill when blending or get to redecorate the kitchen in seconds with tomato soup. The lid has a rubber gaiter so is very watertight and easy to put on and features a measuring cup centre piece to allow you to add ingredients safely when the motor is running.

With its delicious retro look, great range of colours and superb build and performance this really is the Dog’s Doodahs when it comes to blenders.

By Foodepedia8 May 2010Features