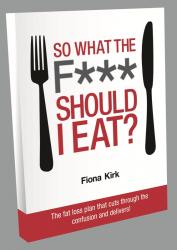 It’s a reasonable enough question, if somewhat blunt. For anybody wanting to eat and live more healthily and (I shouldn’t say this, but more of that later) lose weight, deciding how to go about it can be a remarkably confusing and complicated business. An internet search for ‘diet plans’ produces almost 12 millions options, so as Fiona Kirk says… so what the f*** should I eat?

Kirk is a nutritionist and does not advocate dieting – as she points out, 90% of dieters regain the weight that they lost. But if counting calories, point, sins or whatever else isn’t the answer, what is? Well, Kirk’s answer is The Fat Loss Plan. Effectively, it’s a different approach to eating and living, combining healthy, exciting food choices with sensible exercise. What makes The Fat Loss Plan so different is that it provides a broad blue-print, then lets the reader make the choices and devise the plan that they believe will work for them.

And going back to something I mentioned earlier, this book isn’t for people who want to lose weight, but for people who want to lose fat. Forget notions of losing weight – muscle weighs more than fat – and start thinking in terms of your size. As Kirk says, fish out that pair of jeans from the back of the wardrobe, the ones that have been there for months or more, because they are too tight and use them as your guide. If, after some time following Kirk’s advice, they fit, well who cares what the scales say, you are going to feel good about it. You might even, as she suggests, bin the scales altogether.

The book itself is split into handy chapters. There is a wealth of information on the science of metabolism – useful stuff to understand where earlier efforts to be healthier might have run aground. The body processes different food-stuffs in different ways and getting to grips with this is crucial to losing fat. Later, it’s down to brass tacks, with advice on exercise and diet, including plans and recipes. Encouragingly, the recipes are generally straightforward and avoid faddy ingredients; but for the less common ones (pumpkin seed butter, anyone?), there is also a lot of information about where to get them and more besides.

Kirk has some interesting pearls, one of my favourites being that you should never start a new regime, on a Monday. And when you stop and think about it, hasn’t she got a point there? Who gets up on Monday morning feeling at their best and strongest and ready to change if not the world, their world? I certainly don’t. And interestingly, she doesn’t promote the idea that you have to forego treats: you get the sense that Kirk lives in the real world; a place where friends meet up and don’t necessarily want to sip water and eat salad. The 80:20 principle (if you get it right 80% of the time, you can do pretty much what you like for the other 20%) seems like a winner to me. She’s also a big fan of eating little and often; this is supplemented by ideas again, such as what to keep in the cupboard, freezer, desk, etc. It all makes sense and is something that I’ll be putting into practice.

Really, Kirk has thought of everything. This isn’t just some sort of cheerleading exercise, promising the moon on a stick, rather a realistic way to change your health and well-being for the better. She clearly understands the positives but also the potential pitfalls and the book covers both, so the reader can take heart from the successes and avoid the traps that littler the path to better health.