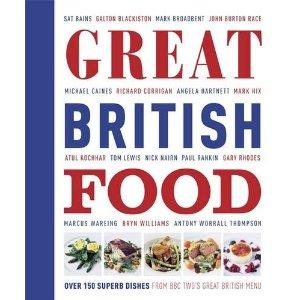 Well the title says it all doesn’t it? Here collected for the first time are the recipes that made us all excited from the Great British Menu series.
All the great chefs are here including Marcus Wareing, Antony Worrall Thompson, Gary Rhodes (remember him), Atul Khocchar and those bastions of true Britishness Bryn Williams and Richard Corrigan. Eh, hang on a sec….

Well obviously they aren’t all British chefs but we get the picture – local seasonal food produced from around the islands to tempt our plebeian taste buds and, of course those of Richard Corrigan’s beloved Queen.

In 2006 these chefs competed to cook a meal for the Queen’s 80th birthday and in 2007 they were cooking for a chance to stick it to the French when cooking for the British Ambassador’s banquet in Paris. Both very laudable reasons to bring their best game to the pass, you have to agree

There are over 150 recipes wrapped up in this bumper volume and it is sensibly divided into four sections: starters, fish dishes, meat courses and desserts and they are all very patriotic and all unmistakeably British. They’ll even offer to take you out to the car park for a fight if you don’t agree.

All of GB’s best and unique ingredients are used here, venison, ham hocks, beetroots, John Dory, rare pork breeds, Somerset cider Cromer crabs – the list goes on and on reading as a roll call of all the things we can be proud to call British. Preferably raising a pint of warm beer into the air as we do so while litter flaps around our ankles in a bracing seaside breeze.

A great collection from what was a very enjoyable TV series and a book to display with patriotic pride on your kitchen shelf even if you have to annexe the French section to do so.