Having always fancied myself as a classical Kashmiri baker, I’m all over Gurpareet Bains‘ recipe for 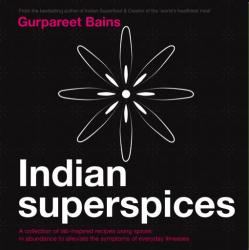 blueberry and fennel flan, from which tradition this recipe originates. Out of the oven comes a rock-cake-like slab of deliciousness. Not sure how historically accurate my endeavour is, but it goes down a treat with the neighbours. And, apparently, has the ability to calm aches and pains. Bonus.

That Gurpareet’s an interesting bloke. In fusing the science of spices with traditional Ayurvedic principles and damn tasty recipes, he’s managed to pen ‘Indian Superspices’- the hypochondriac gourmet’s bible. Whether you’re stifling sniffles with saag paneer, or battling the hangover from hell with haleem, there’s a delicious decocotion guaranteed to get you back on your feet- or, at the very least, on your bum, scoffing a very nice bowl of food.

At first glance, Gurpareet’s measurements seem a little excessive- turmeric by the tablespoon, nigella by the bucketload. Indeed, consuming modest seconds of the lamb masala may well induce psychoactive symptoms, owing to copious use of nutmeg. I’m back in the kitchen, grating away… No unusual psychoactivity, but a pretty decent dinner inducing, as is Gurpareet’s claim, a deep, sweet snooze.

Having won 2011’s English Curry Awards’ ‘Chef of the Year’ title, you’d expect Gurpareet to know his way around a recipe- imbuing him with the authority required to have faith when adding goji berries or juniper to a curry. But trust you must- these dishes may be deeply rooted in medical science and Indian lore, but are all underpinned by that most essential factor- taste. Sweetening the pill, indeed.

And it’s not just food, either- Gurpareet’s dreamed up beverages to soothe all manner of ills any time of day. Start the morning with a tablespoon of fennel in a pain-reliving tea, perk up your afternoon with cinnamon coffee, and nurse a nightcap of mulled chai-spiced wine with 20 cardamoms. You can even have your cake and eat it too, with a heavily spiced superfruit version. And don’t bother with paltry packs of supermarket spice- you’ll be needing industrial quantities.

In case you weren’t already sold on feasting your way around nature’s pharmacy, ‘Indian Superspices’ is littered with quotes from various medical bodies the world over- all pretty solid-sounding stuff. Never mind Heston infiltrating the NHS, Gurpareet should launch a hospital restaurant chain. Slogan? To paraphrase a popular saying- ‘You don’t need to be ill to eat here, but it helps’.