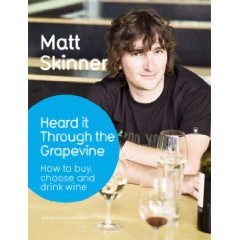 Wine. The final frontier, this is the place where there is still trepidation to tread despite so many books on the subject by so many people. Even my old boss Malcolm Gluck has written one, having first in his smart ad-man way spotted a gap in the market with his Superplonk series. And of course there is Oz and Jilly and all the others who seem to come and go like bottles in the evening. I’m still none the wiser really.

So here is the latest wine buff ready to cheerfully educate our palettes and this time he’s young and unpretentious. The text is set in a size somewhere between a child’s first storybook and a novel for the elderly, so if Matt Skinner is being paid by the page he is on to a nice little earner with this one. It’s okay though as after all it’s a bit off putting to be confronted with a book on wine that looks dauntingly dense.

Matt is cheerfully tousled and looks like he just stepped out of a mobile phone commercial, the ones that are all filmed in the same Eastern European city and impossible to tell apart. His vinous style is to break the wine mystery into easily quaffable sections- Shopping, Drinking, Eating, Sleeping and Wellbeing, which means it’s easy to find what you want to know. In Shopping he compares buying in a High Street chain with buying at auction, on the Internet and at one of those rather swanky independents. He also covers buying wine in a restaurant, an area that many of us still find a bit tricky, although sommeliers today are far less likely to snort derisively at our choices. He compares Old and New World benefits and even discusses the Organic and Fairtrade issues which is both timely and unusual. It’s good reading throughout.

Then it’s on to the drinking bit and where we get to the looking, sniffing, slurping and swallowing stuff which, along with burping, I am pretty good at. Matt doesn’t really have anything new to say about all these things, which is fair enough as there isn’t anything new to say, but he does say it in a very down to earth and accessible way and there are many sound points made in a clear fashion.

Throughout the book is well designed with photos in the ‘gritty/dirty’ style that is currently in vogue. Some of the close-ups of Matt’s chin I could have done without, as he is no advert for Clearasil, but generally this is a wine book for ‘young people’ that has a skateboarding, surfing, travelling and no socks wearing ‘vibe’ to it. Some may find it aimed a bit too much at people still graduating from Lucozade, but for most it’s a solid little primer. Add on his ‘The Juice 2009’, a guide to what to buy now and where to buy it, and you have a pretty good present to give someone beginning the great journey that is wine appreciation.