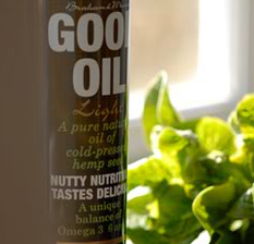 The Good Oil is made from hemp seeds. Yes the same plant strain whose dried leaves fuelled a thousand counter revolutions, or would have if the people smoking it had managed to get it together to get out the house. Of course hemp is not just a drug it is an ancient plant whose tough fibrous stalks made the ropes that fitted out the British fleet for centuries and the rope that made the noose for the pirates.

Down in Devon, presumably behind high fences, they grow the plants from which they get the seeds to cold-press into oil. Two enterprising people, Braham and Murray, make it and are evangelists for the benefits of Hemp Oil which in a nutshell are:

And it tastes great, a fact not to be overlooked. The light version we tried was like a quality nut oil with a subtle difference, and as a salad dressing was quite delicious and as good as some of the best olive oils.

The makers and Hugh Fearnley-Whatsisname say its great to make roast potatoes with but I couldn’t get a result. I even tried a side by side Sunday test cooking some spuds in light Good Oil and others in good old vegetable oil but the Good ones came out less than crispy and with a rather odd taste. Maybe I should have used the heavier version of the oil?

Anyway, this is Good Stuff and I’m using it instead of olive oil on a lot of things. It’s another storecupboard regular now and I recommend you give the Good Oil a go.