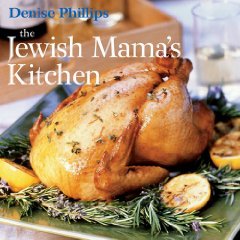 I grew up in a family that, whilst not being religious Jews, were none the less pretty Jewish. Grandpa Isaac and Grandma Rachel would often let off a volley of Yiddish when annoyed or happy and these strange words would stick in my mind. I can’t recall anyone in my family being much of cook though.

Denise Phillips was lucky enough to have a resolutely Jewish Mama and Grandmother and so her childhood was filled with the meals that marked the many religious occasions which the Jewish religion celebrates through the years. In this book she has faithfully written down over ninety tried and tested recipes passed down to her, as well as giving a fascinating insight into Jewish life and cooking.

It seems no occasion is allowed to pass without a meal to mark it, the obvious one being the Friday night meal before the Sabbath when families cook the best meal they can afford. Even when not celebrating a festival though, the Jewish mother finds a reason to cook.

Bread is always being baked, chickens roasted or boiled for the famous soups. The various Jewish groups contribute to the variety found in the Jewish kitchen today. The Sephardi from Spain and North Africa brought dishes of aubergine, of cous cous, spices, salads and other exotic ideas from a hot climate. The Askenazi Jews from Eastern Europe brought a passion for beetroots, starchy foods, stuffed vegetables and other meals designed to ward off the effects of a cold climate. In Israel these cuisines have combined together to create new dishes, but always conforming to the strict dietary rules.

Chopped duck liver is famous, the fried livers mixed with hard-boiled eggs and onions and layered onto Matzo crackers. You can buy it in any Jewish deli, but mama’s version will always win on taste. Barley soup is a classic Askenazi alternative to ‘Jewish penicillin’ or chicken soup, warm and hearty it chases illness away.

Shabbat has its traditional meals too and one is Potato salad with lemon mayonnaise, it’s also served at Passover as it is parev (having no meat or dairy) and no party is complete without home made coleslaw and of course bagels are almost now accepted Western fast food. I love their slight chewiness and especially when stuffed with cream cheese, smoked salmon and black pepper. They are not that hard to make, boiling replacing baking, and well worth the effort.

You’ll also find the recipe for Cholent here, the famous one-pot meal that’s cooked for up to twenty hours and contains almost everything -meat, grains and vegetables. As it is cooked in advance it becomes the main meal on Shabbat when cooking is not allowed. Denise adds Golden Syrup to hers, ‘my secret ingredient!’

Chapters on starters, soups and bread, main courses, Friday night desserts ánd festivals all fight for attention. It’s a window into another world, but it’s also a recipe book that will fit many family lives perfectly, whatever their religion. These are simple tasty meals that encourage everyone to sit at table and talk ánd isn’t that what food should always do?