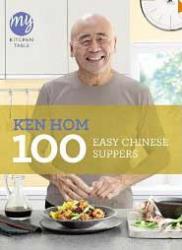 Ken Hom looks much the same today as he did the day he brought Chinese cooking into our lives back in 1982, except he has maybe a few more lines on his face. His first cookbook, Ken Hom’s Chinese Cookery, was a mega-seller at the time and is still in print today,

He lives now mostly in his adopted Thailand, he is in fact American by birth, along with stints at a home in France and despite being semi-retired and recovering from cancer treatment, he popped up on Saturday Kitchen recently. It confirmed him as one of the nicest chefs around and still one of the most skilled.

His 100 Easy Chinese Suppers is part of a very good range of books from My Kitchen Table, which are refreshingly clean and simple. Small enough to slip in a pocket, they don’t waste space inside either. No preamble, no introduction, just straight into the recipes. 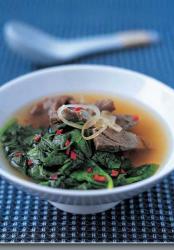 You get a picture on the left page and the recipe on the right. Each one is, as promised, brilliantly simple and as long as you have a basic store cupboard of must have staples – such as Shaosing wine, good soy sauce, sesame oil. fish sauce etc., all of which keep well – then you can have dinner on the table in no time.

There’s not a page without something tempting on it – from stews and curries to easy stir fries and healthy steamed and braised dishes, there are also some great light bites and easy entertaining recipes.

Once you get the Chinese bug from this book it’s hard to stop. You’ll find yourself using it every night. It’s not often a cookbook is this good, this simple and this well produced for the money and it knocks many a posher production into a cocked hat. Well done our Ken and well done My Kitchen Table.

See some of the recipes at www.mykitchentable.co.uk