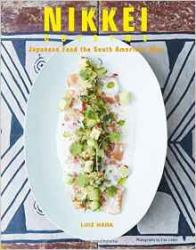 Disclaimer: I have met the author of this book and eaten at his home.

So that’s that out of the way, a bit unnecessary really as most people in the food business, whether critic or kitchen side, know each other if only to nod at. It’s a fairly small world and something of an incestuous one at that.

I’ve been looking forward to getting my hands on this book since I first heard the premise of it. Nikkei cooking always sounds like it should be a car crash of’M1 in the fog’ proportions – Japanese meets Brazilian – but while restaurants featuring Nikkei in the UK have not so far always tended to be great successes, done right it is very good.

Luis grew up in St Paulo, Brazil of Japanese and Italian parentage and came here in his late teens to pursue a career in banking. Getting tired, as so many young bankers do, of being phenomenally wealthy (joke) he turned to food and food blogging and supper clubs and has been extremely successful.

This is his first book. Over 100 recipes that go back to Nikkei’s roots. Nikkei food is not just about South American/Japanese, Nikkei is the food the Japanese cook wherever they happen to be, a marriage of Japanese cuisine and whatever is local.

So in South America you’ll find sashimi translated into tiraditos – raw fish cut into sashimi shape – and in maki acevichado, which resemble Californian rolls. A pasteis is a gyoza dumpling filled with chicken and cream and deep-fried. Pork ribs come coated in miso.

And of course it went the other way, as Luis points out in his thoughtful and well -researched introduction, the first Japanese to arrive in South America were used to mostly eating a fish diet and South America was rich in pork not fish and coffee had to replace tea as their daily drink. 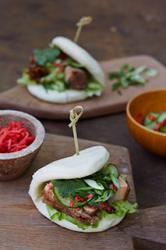 The book has a wide variety of tastes for all tastes, from boneless short rib sliders with foie gras and kimchi mayo to suit burger lovers, to grilled seafood sushi with spicy chifa sauce to satisfy more grown up palates. Grilled aubergines with miso dengaku and mozzarella are a remarkable twist on an Italian classic, while monkfish, seafood and Yuzo Kosho, that characteristic Japanese ingredient of yuzu fruit with green chillies and salt, all cooked en papillote, is a robust dish that pops open with a flood of fragrant steam when served at the table.

The recipes here, as Luis explains, follow as much as possible the Japanese washoku menu philosophy of a balanced meal in nutrition but also in colour, flavour and presentation. And as he also says, no problem if you want to eat them just the way you prefer.

From home favourites to fancy dinner party dishes, the recipes never fail to excite and while some special ingredients are inevitably needed, a handy glossary of terms and suppliers means you needn’t feel anything is beyond your abilities.

Food fads come and go, but Nikkei is something that should put down roots in this nation. A fabulous fusion of flavours curated by a man who has the credentials and the credibility to make them work for any home cook.