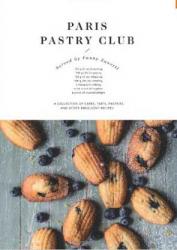 Family, feelings and memories are at the heart of Fanny Zanotti’s writing and cooking and form a strong thread through this, her first cookbook.

Fanny Ã¢â‚¬â€œ who works at the very fashionable Chiltern Firehouse and trained with Heston Blumenthal and Pierre Herme – grew up in the south of France in a family of patisserie devotees. In her summer holidays, she says she’d bake alongside her mother, grandmother and great grandmother.

Each chapter of Paris Pastry Club Ã¢â‚¬â€œ devoted to cakes, patisserie and other baked goods – is introduced with some recollection of her childhood or sense memory.

But it’s all rather more whimsical than Proustian with bizaare recollections that don’t really go anywhere or mean much. Her language is kind of Cantona-esque philosopher meets American teenager.

And there’s also rather a’disconnect’ between the warmth Zanotti attempts to evoke and the stark, slightly cold feel of the book’s design.

Its grey backgrounds and metallic cooking implements laid out in front of the admittedly gorgeous cakes all seems much more’Smitten Kitchen’ than’cooking with maman’.

Elsewhere, there are lots of Polaroid pictures of lighthouses and bleak beaches. Where’s the south of France or the Paris, which she claims to love and have as a massive inspiration?

The book’s chapters are themed by a mix of mood:’Some things are bound to happen (like chocolate on a rainy day)’ and’Break-up menders’ or under more standard headings like’Classics’ and’Dinner Party Desserts’.

But once you break through the whimsy and focus on the recipes, there’s a lot more to enjoy.

Fanny’s list of ingredients and equipment at the start of the book is unpretentious (Ã¢â‚¬Ëœlots of pyrex dishes’) and refreshingly short.

And the clean bordering-on-stark design comes into its own more on the recipe pages.  There’s lots of white space to write your own notes and the lists of ingredients are laid out separately with a big space above the instructions.

The occasional’how to’ box is helpful too with ideas on how to get an attractive neat crack on the top of a loaf cake by piping a thin line of softened butter along it so that this sinks into the cake when it rises leaving the line.

Fanny’s also pragmatic when it comes to ideas for freezing and defrosting cakes.

And even though she seems to have a very French background, she’s not afraid to innovate. Her little orange and yoghurt cakes cooked in a scooped out orange and placed on a muffin tin are gorgeous and have a fresh carefree feel.

But she does take the innovation a little far with recipes like the unattractive pistachio and cherry cake topped with fat, blobby quenelles of white chocolate and cinnamon mousse. And for the most part, Fanny’s better when she sticks to the classics with her recipe for a Fraisier being a stand-out example.

Overall though if you do fancy trying a few French-with-a twist bakes, and you don’t mind the extra verbiage, this could be for you.

By Foodepedia5 May 2014Books