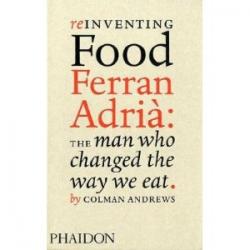 Who, you may be saying, is Ferran Adria and how did he change the way I eat? It’s true that unless you are a keen food groupie it’s unlikely that you’ll have heard of the man. Even if you have, it’s even more unlikely that you have eaten at his only restaurant, El Bulli in Spain. Very few people have given its size and draconian reservation policy.

Up until last year, Adria’s restaurant regularly won Best Restaurant in the World at the Restaurant Magazine Awards. A somewhat dubious accolade as it is impossible to definitively judge such a thing given the diversity of global cuisines. No, what El Bulli was winning was something different, an ongoing show of critical support for his groundbreaking cuisine that, like a Vivienne Westwood creation, can never be generally available but whose influences filter down to the High Street over time.

From dishwasher to ‘creative genius’, Adria’s rise has been phenomenal, supported by a Spanish government delighted to be giving the finger to the French and their Haute Cuisine. His cooking continues to divide people though. There are those for whom he can do no wrong and those who deride him as affected and pretentious. Having eaten his food myself I take the middle ground. Yes it’s all very interesting and sometimes sublime, but I wouldn’t want to eat it every day

There is no doubt that Adria is media savvy and plays the critics well against each other and his pronouncements always stir up controversy. His famous ‘big tongue’, bigger even than Jamie Oliver’s apparently, is never still as he croaks out his Catalan to cowed audiences worldwide

He is an engaging man, passionate of course and when I have spoken to him in French, his English is not up to much, he has always had time to graciously answer the questions he must have heard a hundred times before.

Colman Andrews, an American food writer, is a fan and a friend of Adria but he has not written the authorised hagiography you might expect. In addition to being a definitive biography of Adria this book is also brave enough to accurately quote Adria’s detractors and allow them space. The argument that Adria uses chemicals to achieve some of his food effects, the use of lecithin and methyl-cellulose (often found in wallpaper paste) and citrates used in fire extinguishers are all given fair weight. You will also discover what molecular gastronomy isn’t and why spherication is coming to a restaurant near you very soon.

At the end of the book though you may be still confused about Adria – about the showmanship of closing El Bulli down next year. Or is he? The portentous pronouncements about his food that Colman notes down without even a hint of a wry smile, even when they are plainly ridiculous. The question lingers like the smell of cooked cabbage. Is Adria just a big kidder?

I think he’s not, from this book emerges the portrait of a chef who, somewhere along the way, discovered he could do something different and a critical world starved of novelty would play along and talk him up. His food is remarkable, amazing and bloody stupid all at once. He is unique and he gives good copy. Read this book and work out for yourself whether, like Joaquin Phoenix in I’m Still Here, Adria is now no longer sure himself whether it’s all a joke or not.

To celebrate the launch of the book, Ferran Adria will be in conversation with Colman Andrews at an exclusive evening event at the Royal Geographical Society on Sunday 24th October. Tickets are on sale now priced at £24, which includes a free copy of the book.