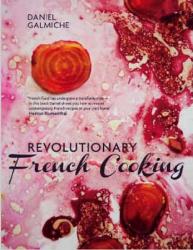 For a book with such an aggressive title, it’s surprising to find that it boasts one of those squishy, girly, quilted covers. More Mary Berry than Marco Pierre White.

Inside though Daniel Galmiche,  head chef of The Vineyard at Stockcross, Berkshire, goes hard with a range of recipes that grabs French cooking and shoves it into a blender with ingredients and styles from all over the world.

It has a foreword by Heston and a mission – to shake up French cooking, but at the same time not throw le bebe out with the bathwater. The world is of course full of books celebrating traditional French cooking and many food writers are still in thrall to the French past and to the idea that no one does it better.

A younger generation of French chefs has travelled beyond French borders though, and brought back an enthusiasm for flavours their forebears would not have even known of much less enjoyed.

The book has three sections -Liberte, recipes’liberated from the shackles of traditional French cooking’. . Then comes Egalite where’humble ingredients are elevated to starring roles’ and finally Fraternity where’innovation and style are brought to classic combinations of ingredients’. You’ll gather from this that Daniel has not abandoned French boastfulness. But he does do the job, the recipes are leap off the page attractive – lime leaf poached chicken, coriander and star anise pork rillettes; balsamic and lime raspberries with goat’s milk ice cream, casserole of lamb with pomegranate molasses.

There are over 100 recipes across starters, mains and desserts and it’s a book that excites and inspires. Vive la revolution!