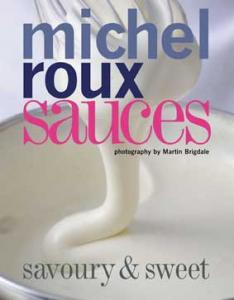 The majority of my cookery books approach a dish, or in some cases, an entire menu, as a complete composition of components to be strictly adhered to as one article. Yet whilst such presentation enables the writer to compose combinations of flavours, textures and ingredients for the meal, this overly prescriptive “monkey see, monkey do” approach leaves little leeway for flexibility, experimentation or intelligence on the part of the cook.

Michel Roux’s re-published ‘Sauces’ – the latest in a line of publications including ‘Eggs’ and ‘Pastry’, which was short-listed for the André Simon award last year – highlights the importance of merely one aspect of cookery, which is frequently added as an afterthought or an as-well-as, more out of habit (gravy with a roast dinner) or necessity (custard for a dry sponge) than respected as the important component it can be in its own right. His work brings into the foreground the potential for exploring flavours, complementary ingredients and even textures within this aspect of the dish.

Don’t be fooled by the simplicity of the title, since this book covers a range of accompaniments, some of which – such as the Parmesan or (eerily clear) tomato waters – can stand alone as a dish in themselves. Nor is it all liquids – viscosity ranges from infusions to glazes, butters and chutneys. It is, however, slightly less egotistical than his previous tomes: ‘Only The Best’, ‘The Art of Cooking With a Master Chef’; ‘Michel Roux’s Finest Deserts’; ‘Le Gavroche – Ten Recipes from One of the World’s Great Restaurants’ (although that last one was admittedly by M Roux Jnr, inheritor of the ego as well as the name, evidently). It is a nice book, although I’m guessing that line alone will not cut it as a review.

No leftovers from a Sunday roast will ever be the same without the rocket and horseradish sauce introduced here, whilst Thermidor sauce is presented without lobster, due to a compatibility with other shellfish which would otherwise go un-regarded. Michel Roux’s Jasmine tea custard will also gaily dispel any lingering qualms brought about by memories of the gloopy school dinner variety.

The presentation addresses the process by which these sauces are to be reintroduced to the menu by listing by type (savoury coulis, ceviche marinade, fumet, and the secrets of the Roux brothers signature sauces are all covered) in providing a separate index for food pairing, as well as the more traditional method by name and ingredient. An introductory section outlining the key equipment and techniques required throughout the book is also featured, including a quick guide to the subtle nuances of the genre (heating crème fraiche over 80 degrees is liable to separate, add cheese tentatively since it takes time for the flavours to develop, how to thicken sauces with eggs) which is unassuming of the less experienced cook, yet not patronising or intrusive for the seasoned* professional. (*no pun intended)

However, to reap the bountiful potential rewards from this book requires a monk-like dedication to the cause – many recipes are time consuming, and demanding of endless fine sieving (oh, for the luxury of a kitchen porter on hand to deal with the washing up ramifications of such a process!) Other recipes are slightly extravagant, such the langoustine butter requiring 12 langoustines, of which the meat itself is disregarded.
Yet this is a powerfully seductive tool for being coerced to the undertaking such graft. Martin Brigdale’s beautiful photographs entice and elicit hunger pangs, whilst the simplicity of Roux’s language makes otherwise complex dishes seem less intimidating. His passion and even-handed experience comes through loud and clear. Through crafting this book, Roux has elevated the delicate balance of flavour, viscosity and appearance of sauce-making to an art in itself.

Michelangelo could have slapped a bit of Artex or Dulux One-Coat on the ceiling of the Sistine chapel and its function would have been much the same, but it was the time, patience, attention to detail and commitment to an overall composition which contrived to make his work the work of legend. This book will force you to reconsider the use of Bisto gravy granules in much the same way.