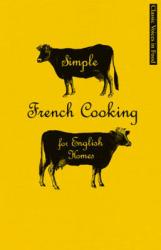 Back in 1923 a Frenchman from Poitiers, pushing 46 years old, sat down in London to write a cookery book. Today when every blogger who asks nicely can get a book contract from increasingly desperate publishers, this may seem normal but it wasn’t back then. Of course Monsieur X. Marcel. Boulestin was far from normal.

He fell into food after a career that had taken in translation, making handmade candle-shades, journalism, decorating and a bit of cooking for friends in his adopted home of London. He had no formal training but had ‘eaten well all my life and had an instinct’. On the strength of this he was offered the book contract plus an advance of £10 and this is the book that resulted.

Part of Quadrille’s Classic Voices In Food series, it now has an introduction that tells us more about Boulestin – how he went on to open a restaurant of the same name, one that survived until the 1990s, and how he was one the first TV chefs ever, appearing dressed in a suit in a cramped kitchen in 1937. His recipes never called for expensive ingredients and while not for complete beginners they were rarely hard to follow. The book was a success and made his name.

Interestingly he made two statements which resonate still. ‘Do not be afraid to talk about food. Food which is worth eating is worth discussing.” Today, when whole sections of British society do little else, it’s worth remembering that it’s only comparatively recently that we have ‘come out’ as foodies. 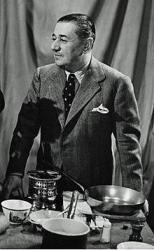 He also said ‘Cookery is not chemistry it is art. It requires instinct and taste rather than exact measurements in all but a few cases.” Well that’s Heston blown out the water then.

The recipes have no accompanying pictures, not only was the technology not available one suspects Boulestin that would have not wanted any, seeing them as probably intimidating to the home cook. There are no measurements either, just instructions to ‘take some onions’ or ‘cook some potatoes’ or ‘use half a claret glass of dry white wine’. It’s refreshing to be presented with recipes this way. And they sound good too plus there’s a handy final section ‘A Week’s Menu -Showing how to use up everything’ that is as useful today as it no doubt was then.

Anecdotes and advice fill the book, as does Boulestin’s engaging personality. Pretention free and a good read into the bargain, Boulestin’s lovely little book deserves to be discovered by home chefs and budding recipe writers alike.