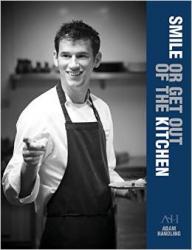 Rather an aggressive title for a book but then Adam is a bit of a fighter. A runner-up in the Masterchef 2013 final he took it on the chin and went on to become British Culinary Federation Chef of the Year 2014 and head up his own restaurant, Adam Handling at Caxton , which for some reason has so far escaped critical notice, perhaps for fashion reasons.

If the dishes in the book are anything to go by Adam is not exactly on trend for the younger foodie, the dishes are a bit fiddly, a bit demanding of both chef and eater and need a good store cupboard and some advanced technique. However in the intro Adam refutes this claiming that under the visual complexity’is a simplicity anyone can grasp. This is a book for home cooks who, like me, really do give a damn about food’.

Certainly the recipes – starters, vegetable, fish and meat dishes and dessert and cake, as well as the basics such as breads, oils and stocks, are modern and exciting; devilled pork skins with Yuzu mayo make use of pork skin and some fancy ingredients available in most cities and easily online. Reflecting Adam’s interests, this and many of the recipes within the book contain Japanese and South East Asian ingredients. 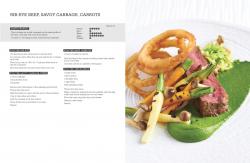 Each recipe has a taste profile, which is an interesting idea, detailing sweet, sour, salty, bitter and that rather debated concept, umami. Umami being an expression invented by the makers of MSG, not that there’s any MSG in Adam’s dishes of course.

Monkfish, burnt cauliflower, baby gem, roast garlic and parsley veloute looks good in the photo and has to taste good and seems, as Adam suggests, not desperately hard to put together but personally I’d want to have someone helping me out

200 full colour images and over 80 recipes all of which I’d happily eat, it’s a book to perhaps satisfy the emerging or experienced  home chef; you’ll need to know how to walk before you can run with this one, although his Goat Shepherd’s Pie looks easy enough once you’ve got your goat, of course. ‘

So smile, have fun and get into the kitchen

At RRP £25, Smile or Get Out of the Kitchen can be purchased online at www.adamhandling.co.uk and also from  St Ermin’s Hotel, where Adam Handling at Caxton is located.