This beguiling book had me at the subtitle Ã¢â‚¬â€œ’the story of traditional Arab sweets’. Oh, go on then. I’m all ears and I bring 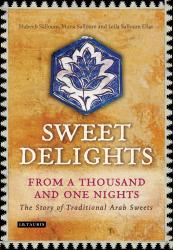 with me a whole mouthful of sweet teeth. I’ve also got a fair appetite for a bit of food legacy and legend, so this exotic Middle Eastern delight had my belly dancing from the off.

IB Tauris is a publishing house known for food books which give you a fair bit to digest. Clocking in at over 250 prose-packed pages,’Sweet Delights…‘ should sustain the greediest reader for a good long while Ã¢â‚¬â€œ rather like the syrup-drenched, butter-laden delicacies described.  The book is a sugar-fuelled journey from Iraq to Egypt, via Syria and al-Andalus. There are a handful of colour plates, but that’s really not the point.

The introduction to’Sweet Delights…‘ alone is as bountiful as the most bumper of selection boxes.  It considers history; geographical variation; key ingredients; equipment; supposed medicinal properties; and the symbolism of sweetmeats in Arab traditions. AND it’s got a good glossary – a rarer treat these days than the much-mourned Thornton’s jelly spiders.

If you’re after recipes, there are plenty to feast on. Don’t be alarmed by strange terminology and quantities to feed an entire royal courts’-worth of sugar-fiends Ã¢â‚¬â€œ these are the original receipts, presented for posterity and then handily modernised for the home cook. There are lengthy chapters devoted to pastries, cookies, cakes, pies, candies and puddings Ã¢â‚¬â€œ all oozing with ample information to get stuck into like the most toothsome toffee.

The treats might be tasty, but even sweeter pleasures lie in dipping into the medieval poems, stories and anecdotes that narrate the tale of each item. The authors are a triumvirate well-versed in sweet-talking on the subject of Arabic confections, with Muna and Leila having already collectively penned’The Sweets of Araby‘ in 2011. They present the book not as a cookbook, rather,’a reflection of the pleasures of (ancient Arabic) society…at the table of caliphs and kings’.

The recipes in’Sweet Delights…‘ rely on ancient ingredients which provide more than simple sweetness Ã¢â‚¬â€œ unrefined, natural products like honey, dates, figs, and syrupy pomegranate molasses. To that end, you could pretty much justify crazy consumption as a new’healthy eating’ regime. Hey, if you’re going to indulge, I’m sure there are far worse ways than with nourishing sesame cubes, Valencian pumpkin pudding, or fibre-rich, nut-stuffed dates.

A book like this illuminates its topic most excellently, but also provokes a fair few’lightbulb moments’ as you realise the roots of some of your favourite sweeties. Case in point -you might have hazy memories of milk puddings from your own childhood Ã¢â‚¬â€œ but no matter how long ago you started drawing your pension, the tradition goes back far further. And who knew that the Tunisians were all over the donut market well before Krispy Kreme cashed in, with their very own’yoyos’?

If all the sweet information has got you craving still more, flip to the back for a bibliography that runs to 8 pages. Despite all the sugar-sprinkling, this is a serious academic achievement. Unlike the majority of confectionary cookbooks whose appeal is as fleeting as a sugar rush, the cover of’Sweet Delights…‘ doesn’t need to feature a clutch of cutesy cupcakes in order to tempt. 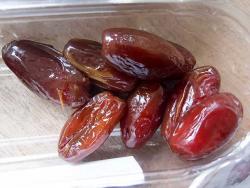 This book is far more complex in its construction than the most spectacular, rainbow-hued, multi-layered cake, and far more satisfying. Granted,’Sweet Delights…‘ isn’t the one to pull from the shelf when you want a five-minute foolproof fudge recipe.  In a world of cookbooks crowded with quick fixes and super-speedy solutions, it’s sweet relief to dig into something that goes so much deeper.