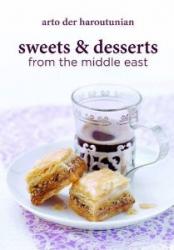 , The Witch and The Wardrobe’. Although Edmund’s greed may have put him in a rather sticky situation similar to one created by cooking up any of these confections, that chap ended up with considerably less delicious results.

For these recipes yield all manner of delights, Turkish and otherwise. The topic may be sweetmeats, but Arto der Haroutunian’s prose is far from sugary. With its scholarly tone and more history than an episode of Time Team,’Sweets & Desserts’ is not a book suited to those with heads full of candy floss (or pashmak, as the Persian version is known).

That’s not for a moment to suggest it’s in any way dry. As an author, der Haroutunian understands how to make both prose and pudding palatable: that desiccated passages need juicy details just like the dry leaves of brittle baklava need a liberal dousing of syrup. And how, with both, it’s imperative to avoid the over-floral.

Through his words, der Haroutunian has managed to create colour in every chapter. But when it comes to painting the brightest portrait, a few images never hurt. Pleasingly,’Sweets & Desserts’ is strewn with pastel-hued pictures of the sort of sweetmeats you’d happily have by the handful any time of year, plus plenty of ice-creams, drinks and jewel-like preserves.

But would you make them yourself? Not from the original recipes, that’s for sure. So why has der Harouturian seen fit to include these lengthy, impenetrable instructions alongside his modern, simplified methods? Maybe because they’re fascinating, detailing esoteric measurements to yield mind-blowing quantities to satisfy the sweet teeth of both Ali Baba and every one of the 40 thieves.

The author is a bit of a pilferer, too, purloining quotes from texts both fact and fable to pepper his prose with delightful diversions. And it’s surely nothing short of criminal to present a collection of recipes that demand one instantly clear out the nearest souk Ã¢â‚¬â€œ okay, supermarket Ã¢â‚¬â€œ of sugar, spice and all things nice.

For that, for the most part, is what these recipes are made of. Plus pastry, fresh and dried fruits, and liberal amounts of fat. The book’s divided into a dozen chapters, all worthy of equal savour. The headings are helpful for narrowing down a whole tome of titillation to a single sweetie: once you’ve chosen baked, boiled, fried or frozen, you’re well on your way to making an actual decision.

Even then the options abound. Pick’Pastries’ and you’re looking at almost 20 offerings; excluding the similar number of recipes in the’Baklava and Kunafeh’ chapter which surely count in this category. Although making a selection is a pretty happy example of’Hobsons Choice’. And, when you add’young girls breasts’ to the equation, a bawdy one, too.

The names and translations are frequently as delicious as the dishes they describe Ã¢â‚¬â€œ’sweet lips fritters’,’ice in paradise’,’Istanbul nightingale pastries’. Whether you get stuck into the descriptions or straight in with your wooden spoon, you’ll recognise many morsels that we’ve adopted as our own Ã¢â‚¬â€œ shortbread, donuts, rice pudding, cream horns.

These recipes are the precursors for the sort of stuff that’s made it to dizzy heights of the high-street bakery. In effect, it’s the trickle-down of these antiquated dishes that enable Greggs to earn such a handsome crust. Although it’s unlikely we’ll see tahini cake or chickpea and bean pudding alongside the yum yums anytime soon.

They’ll elicit precisely that exclamation if you create then in your kitchen, though. And what better way to get your five-a-day than in the form of carrot halwa? The surprises don’t stop with the vegetable basket. Lentils, legumes and strange grains all appear, and all appear to yield something more marvellous than George’s medicine.

So treat yourself Ã¢â‚¬â€œ or someone else Ã¢â‚¬â€œ to a decent dose of’Sweets & Desserts from the Middle East’. After all, as Mary Poppins put it so lyrically,’a spoonful of sugar makes the medicine go down, in the most (Turkish) delight-ful way.’ Well, almost. And, in that slightly paraphrased form, she was right.