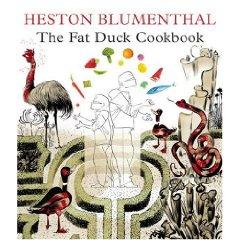 In the late 1980’s, while living in a one bedroomed cottage in Beacon Hill, Zanna Blumenthal was awoken at 2.00am by a clearly disturbed individual wielding a crème brulee. She’s still married to him. Reading the extended History section of Heston Blumenthal’s remarkable Fat Duck Cookbook, it becomes increasingly obvious that the real story behind the success of one of the most famous chefs on the planet is not the familiar cooking meets science shtick, but one of almost superhuman spousal forbearance.

Unwelcome midnight snacks aside, Blumenthal admits to spending every penny the couple had on expensive ingredients for his potentially ruinous pre-Fat Duck amateur cooking habit, and even sold the couple’s car in order to fund a dining trip to France (at least he has the good manners to take his wife along with him). After opening the Fat Duck, Blumenthal says that the stupidly long hours required to run the restaurant made him ‘effectively…an absent husband and father” earning him the nickname of ‘the lodger”.

Things have ultimately worked out for the couple, but even as late as January 2004 when Blumenthal was awarded his third Michelin star, he discloses that he had ‘absolutely no cashflow”. It these revealing nuggets of information that really bring to life Blumenthal’s rather leaden prose which stymies an otherwise entertaining rags to riches story with plodding detail.

It takes old dome head three pages to explain that he read a few books when he first began to discover gastronomy, and you wonder what the editor was thinking allowing a whole paragraph explaining the difference between the Michelin and Gault Millau guides to stand in an already over-long book (The Fat Duck Cookbook runs to over 530 large format pages).

So what makes this less than perfect tome remarkable? The production values for a start. There’s the sumptuous food photography of those singular, world famous dishes such as Snail Porridge (complete with live snail); the iPod-tastic Sound of the Sea and eye-poppingly opulent Gold, Frankincense and Myrrh with its gold leaf-wrapped bars of solidified langoustine bouillon. Dave McKean’s colourful, imaginative illustrations lend the volume a storybook quality, with a cartoon version of Blumenthal cast as its central character.

A comprehensive section on Science tells you everything you’d ever want to know (and a fair bit more) about the equipment, ingredients and techniques used at the Fat Duck while contributions from the likes of Gary Beauchamp of the Monell Chemical Senses Center in Philadelphia provide the background material on subjects such as flavour preferences and perception that inform Blumenthal’s approach to cooking and restaurateuring.

For anyone other than fellow and aspiring three Michelin-starred chefs, The Fat Duck Cookbook is misleadingly titled. No one in their right mind would undertake the fifteen separate stages it takes to create a dish like Roast Turbot, Mussels, Artichokes and Jelly of Verjus, Turbot and Langoustine Royale, Veloute of Button Mushrooms (except that is the Netherlands-based student who is blogging http://thebigfatundertaking.wordpress.com/ his attempts to cook his way through the recipes a la Julie/Julia).

But its that very impracticability that makes the book such a joy. Serious students of the culinary arts will no doubt draw much from Blumenthal’s pain staking documentation of his work, the rest of us can just browse our way through a delightful gastronomic theme-park ride.