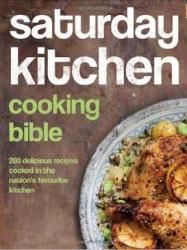 Is yours a household where Saturday Kitchen quietly burbles in the background as you listen with half an ear to the chatter and jokes, occasionally pausing to say,’doesn’t Keith Floyd look really sad in those old clips?’ to no one in particular?

Or do you watch it attentively, almost manically, Twitter open at your side ready to say something rude about James Martin at every possible opportunity? Many people seem to. Odd, isn’t it? I may be biased, having had the recent opportunity to sit behind the cameras during its live broadcast, but I find it an amusing bit of telly that’s well-produced and entertaining. James Martin is quick-witted and the guests, both chefs and civilians, well chosen. It accompanies all my Saturday morning household tasks and the cat seems to like it too.

It’s sometimes hard to muster enthusiasm for savoury recipes at 10 in the morning though, but here is the book of the show to be consulted at a more suitable hour. You could find many of the recipes on the BBC website of course, but this saves you getting your laptop or tablet all floury and some of us still like books, as opposed to printouts.

200 recipes across starters, mains and desserts make it a good deal for a kitchen inspirational and for the most part the food is family friendly and fast to make, with contributions from all the great chefs that have been on the show such as Michel Roux, JosÃƒÂ© Pizarro and StÃƒÂ©phane Reynaud. The emphasis is on family-friendly food, speedily made. And there are quite a few from James too, in case you’d forgotten he is actually a more than competent chef too.

It’s hard to believe just how many years Saturday Kitchen has been going now, but I think most of us would miss it if it went, including paradoxically all the nutters on Twitter. They’d have to go outside and play instead.

So recall the past year of banter and omelette challenges with this good and inspiring compendium of great recipes and cheerful chat.  This edition of the Saturday Kitchen cookbook is one to stick on your own kitchen shelves and refer to when other cookbooks make you feel inadequate.