What’s better than judging something by its own standards? And when that thing has a title as long as this, the least you can do is to make some use of it. Here goes. 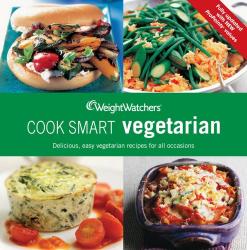 WeightWatchers. Yes, it is very definitely by WeightWatchers. Details of the scheme, its meetings, its online presence etc. are included on the inside flap, and their new ProPoints system is found on every page, which, I learn, is the result of ‘global, scientific developments’.

There are some other trademarks promoted too though, products that have probably made a healthy profit by aligning with the WeightWatchers outfit. The most conspicuous are Quorn and Boursin, less surprising is the inclusion of ‘Weight Watchers from Heinz’ baked beans and calorie controlled cooking spray seems to be the best friend of the Cook Smart vegetarian.

And then the clouds part. I notice that this book is a greatest hits album of previous WeightWatchers releases. That explains the inconsistency, but not why the editors didn’t try to provide the book with some coherence.

Cook smart. What might they mean by smart? It is smart in that it provides recipes for special occasions dishes in a ProPointed guise, thereby outsmarting any potentially difficult situations for those following WeightWatchers, but is it smart cooking in the sense that it is intelligent, up-to-date or interesting? A proportion of the recipes are, such as Sicilian aubergine stew with polenta and some of the rustic-looking pizzas and tarts. A number of classic vegetarian dishes appear too however, for example macaroni cheese, Spanish omelette and stuffed jackets. Other throwbacks to vegetarian food of a few decades ago include the nut loaf, closely followed in the category of vegetarian cliché by a nutty chick pea crumble. It might have been smarter to exclude some of them in favour of some more unusual dishes, ones cookery book shelves are less likely to already contain.

Vegetarian. Yes, the whole book is vegetarian, and that includes an absence of fish. Most of the dishes manage to avoid looking like there’s a hole on the plate for some meat, but there are some that seem to apologise for a deficiency. This is epitomised by a dish that is, personally, the least appetising dish of the book: Quorn au vin. Surely it is possible nowadays to embrace vegetarian cooking for its own merits, rather than trying to make it imitate other strands of the discipline.

All that said, cooking from the book was nearly always rewarding. The recipes involved the right balance of simple ideas and more complicated ones and managed to produce interesting tastes without requiring an excessive investment of time or money. A couple of times, the portion advice was extremely generous; on one occasion I ended up eating the spinach cannelloni three nights in a row.

The key to getting the dishes right though was focusing on the seasonings, making them do the work other products had managed shirk by being low fat. This may seem an obvious point, but get it right and your diners won’t necessarily guess that the meal came from a WeightWatchers cookery book. I certainly tricked a few.