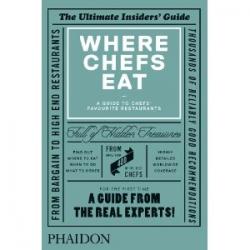 Who Will Buy the book Where Chefs Eat? The foodie equivalent of the people that buy Wisdens and Bradshaws perhaps, or the people that buy those Schott Miscellanies, the design of the latter being rather a strong influence here. In fact it’s a shame this book came out post Xmas as its sales could have been high in the pre Xmas week from desperate people grabbing it off the’take-one’ display in the mistaken belief that it was a humour book suitable for Uncle Bob.

But the book has sold very well anyway, at one point even outselling The Hairy Dieters, which must have caused some expletives from the biker boys’oop north. It could be considered a rather poncy southerner kind of concept this kind of thing, after all.

Over 400 chefs worldwide were asked eight key questions about restaurants – ones they wish they’d opened, the best for breakfast, late night eating, high end dining and so on. The returned forms were presumably converted into punch cards and fed into one of those giant IBM computers, the kind that features large tape reels rotating first one way and then another, and with a weighty thump the book emerged out of the rear end.

So how do you use it? Well not in the way you might expect, by looking up somewhere you’re going to and seeing what places the enlisted chefs recommend, as there is no actual index by city or town. Instead you need to look up the country section, then look at the country map, and from the map identify any pages that will be of use. Some cities do get their own dedicated entry in the index, Barcelona for example, but others you might think might deserve special billing, such as Rome, don’t.

There is an index by restaurant name but perhaps if you already knew the name you wouldn’t need a chef to help you discover it? The real value must be for the restaurant owners quickly flipping through the book, desperate to see if they’ve been included, before the shop assistant catches them.

Of course few normal people, when pressed, can actually name even five working chefs and odds are they would mostly think of Ramsay, who isn’t in the book and Blumenthal who is, despite being more of a James May of food these days. But if you’ve heard of Harald Wohlfahrt,’in 2005 he was awarded the German Order of Merit’ then you can now find out what he likes for breakfast.

Some selected restaurants, like the chefs, are given short summaries,’Why not make a meal of it and stay the night as this restaurant has rooms?’ cheekily suggests one. Indeed and why not avail yourself of the well-stocked minibar while you’re at it? It is however good to know that De Pastorale’is one of the more famous restaurants in Belgium’ as, rather like famous Belgians, it’s often rather hard to think of any at all when put on the spot. This could be crucial information if you ever compete on Pointless or actually, and obviously inexplicably, do find yourself in Belgium.

The book also exists as an iPhone and iPad app and that would seem the best medium for it as it’s presumably searchable by keywords. It also means that it can be updated easily because restaurants, and indeed chefs, have a habit of disappearing or just falling out of fashion almost overnight. You wouldn’t want to arrive at the legendary De Pastorale only to find it had been turned into a mobile phone shop with chef now serving up Unlimited Text contracts.

This guide is perfect for those given to food fantasising – compiling gastro trips and dreaming culinary dreams. If you’re a restaurant spotter, don’t believe in Michelin stars, take critics’ recommendations with a large pinch of salt, or simply don’t like taking chances, then Where Chefs Eat should be Just What You’ve Been Waiting For.