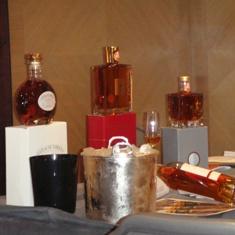 To use a Homer Simpsonian style expression Mmmm Armagnac, or should it be Hmmm Armagnac? You would think that an invitation to attend an event to celebrate 700 years of Armagnac, to learn about its development and production and of course, to sample the wares of the different producers of this French spirit would be something to leap at. Indeed, I did leap at the opportunity and when it got to the tasting part of the afternoon began to remember why I quite often avoid such events……

Having arrived at The Connaught Hotel, a little way off Grosvenor Square, I was guided into the room that the presentation and samplings would take place, a very pleasant and charming space but filled with what seemed to be in the region of 100 people it quickly became rather more cosy than one can comfortably cope with.

Our speakers addressed us on the history of Armagnac and its positioning on the market with cousins Cognac and Calvados, the differences between them in that Armagnac is an artisan product as opposed to cognac which is not. We were regaled with information about the different grape varieties that are used in the making of Armagnac and the impact different types of soil have on those grapes and ultimately the product. We were then told about constrictions on when the distillation process must be completed and the process of ageing that varies, from product to product giving each their distinctive taste and texture. All very interesting, I am sure, but when we were told that there were differing views among producers as to the impact of oak ageing, oxidation, evaporation and maturation, I did begin to wonder what the value of this presentation was. Maybe I am a philistine in the eyes of the Armagnac community for holding this view, but really.

The presentations complete we all stood up and made our way, individually to the range of ten or twelve tables where producers had set up stalls and invited us to taste their products. It was then that the memories of badly organised tastings came flooding back. It seems to be etiquette at these things for large people to stand in front of a table and completely occupy the attention of the person representing the company whose product sits upon it and not move until he or she has sampled every single thing on it, it does wind me up a little, as you might have guessed. Anyway, somehow I managed to sample some 15 different Armagnacs, two or three each from some five or so producers before my patience and the heat of the room made me decide to leave. I’m sure there must be a better way to organise these things.

So, on to the golden nectar, well, mostly golden as there is a white variety. I have to say that there were distinct similarities between most of them, clearly those that had been aged for longer were smoother and richer, in general. I don’t propose to describe each one, but for example the Castarede VSOP had a good fruitiness and a syrupy texture with some heat in its finish, the XO from the same stable had similar fruity notes but was softer and more refined from its longer ageing process. Delord’s VSOP had good grape flavours that were very pleasant again with some heat in its finish, whereas, as you might imagine the 25 year old was much softer. The Janneau varieties XO Royal and their 30 year old both had good body and fruitiness, but of course the older one had finer notes in it. Are we detecting a pattern here?

A number of the producers present retailed only to the restaurant trade, so chances of sourcing some from your local drinks store or supermarket are slim. Having said that Armagnac is a good alternative to Cognac, and made by small producers from the Armagnac regions in France it is an artisan product that is well worth sampling and finding one you like. So, I would say to you, despite my less than comfortable experience, go out there and try some, maybe next time you have a digestife at a restaurant, or maybe just take pot luck and buy a bottle. There are some better known brands, Janneau, a case in point, but there are many varieties out there and I can say that none of those I tasted disappointed. Does that make me a lush?