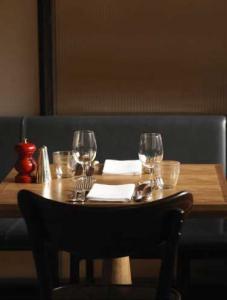 What is it with the bloody front door at Hix Soho? Every time I go there I have to fight the thing to get in. I’m not alone either, I often go past the place and see would be punters shoulder-charging the door and bouncing off again. No visible handle and some kind of damper system seems to be the problem, but that’s what you get when you take over an old Japanese place I suppose. Inscrutable technology.

Mind you enough people do get in to make it full most lunch times with an ‘old Soho crowd’. Admen, publishers, lighting cameramen, directors -all mostly 30-something and knocking back the food and wine like there’s no tomorrow and the entertaining expense account still good for a few months yet.

So what are they eating? Well on paper pretty much what their lower paid staff were eating in places like All Bar One some years back, but obviously with higher intentions. Nothing leaps off the menu to make me particularly excited, but when you’re business lunching that’s probably just as well. You don’t want to be questioning the client’s brief while getting confused over what’s on your plate.

My starter of Heaven and Earth, which I actually do need to have explained to me , is Black Pudding with potatoes – a cannonball set on mashed spuds. Elegant it is not, with the skin of the pudding peeling away gently. I didn’t know black puddings came this big to be honest, but it’s big on flavour fortunately and the mash is leavened with BP’s best friend- apple – plus a touch of onion. Being a loose BP, like a French boudin, the whole dish can be eaten with one hand whilst turning over manuscripts or film scripts with the other. I like it, but I can’t say it’s anything more than likeable. Maybe that’s all it needs to be.

Not so sure about my mains though. A piece of Pollack replaces the now endangered cod that might have landed on my plate a few years ago. When I was a lad on Brighton Pier we threw pollacks back, or gave them to the cat. How times change. This one is nicely seared on its skin side but is as dry as can be inside. The flavour’s good, but the dryness is not endearing. Underneath is potato that was advertised as coming with lava bread, which I suppose is what the black flakes are, but it seems to me that you either serve seaweed in quantity or not bother at all. Perhaps the Welsh lava bread farmers were loath to put on their wellies this week? The cockles that are dotted about are lovely though and still deliciously briny. What’s more they are all in their shells; I hate hunting for the meat, only to find that I have a load of empties and someone else has got a hold of my cockles. No one wants that do they?

My cabbage is served virtually whole, but that’s ok with these tender early pointy ones. I eat next door’s creamed spinach to try; it’s pleasant but I think it belongs back in 1960. Her chips are good though. Hastening to get back to the office, I don’t do desserts. Shame as they looked rather tempting in a no nonsense way.

Hicks I suppose is a restaurant mogul more than a chef these days, although he keeps Independent readers happy with regular recipes. Hix Soho at lunch caters to the needs of men not into fancy food, those who want to simply eat and relax. Maybe sink a drink or three, possibly get pugnacious in the street later when overtired and emotional. It’s bloke-driven cuisine, for men who call their women by ironic, sexist, terms and laugh heartily while flicking metaphorical wet towels at each other. It’s not really me but it’s really okay. Apart from the old pollacks that is. Boom! Boom!