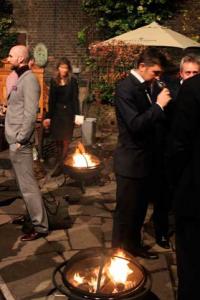 What is a single-cask malt Scotch whisky? Well, obviously exactly what it says on the tin, or in this case the barrel. There’s no blending with other casks or with the other malts – it’s the pure expression put into a bottle. Depending on the size of the cask, and on evaporation, the number of bottles obtained varies from 600 to 200, which makes them very rare and sought after.

And, because they are bottled at cask strength and not diluted, very strong too, 60% or so. As we gathered in an upstairs room in Quintessentially Soho, the man from Diageo made the obligatory statement about enjoying alcohol responsibly. These little taster glasses of The Manager’s Choice pack a punch he reminded us as we hopped from foot to foot with impatience to get stuck in.

Manager’s Choice is Diageo’s first complete collection of single-cast Scotch whiskies. Aimed at collectors and connoisseurs it’s been chosen over time, and by the expert managers, to represent each of the 27 distilleries authentic whisky signatures. Released over four batches, this evening’s samples came from the 2nd and 3rd batches to be released next year.

We nosed, we sipped, we swirled them around our mouths. Some people dutifully spat them out, others like me swallowed them happily. I did, however, regretfully pour what wasn’t drunk from my glass into the bucket provided. Regretfully because these bottles vary between £200 and £300 each and how can you waste such precious liquid? Well, the answer is that if you don’t want to get wasted yourself, you simply have no choice.

Only when in the club’s gorgeous garden hidden behind Soho Square and trying the final whisky, an incredible Talisker did I succumb knowing it was the last before I left. We held our glasses up to the patio heaters, which didn’t warm the whisky much but did threaten to boil my head, and eyed each other through the pungent wood smoke of the burning braziers the club had laid on. This was the Big One, soft and peaty and with a hint of apple, it had been aged in a Bodega Sherry European Oak barrel filled back in 1994 on the Isle of Skye. Just 582 bottles had emerged ‘only 479 now,’ said the man from the distillery wryly, as he opened the last of the three he had brought with him.

It was a rare opportunity to taste some of the finest whiskies I am ever likely to see and as I walked reasonably steadily out, I hoped someone would buy me a bottle as a present.

If you’d like to buy someone very special a gift that, if not drunk, will appreciate in value year on year, then go to www.malts.com to learn more about when they will be released and also where to buy them