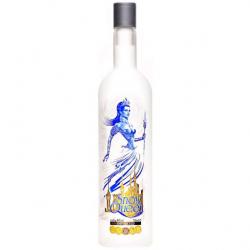 It’s not Kazakhstan’s fault that it’s become rather linked to Borat; it’s just that it has such a very emotive name. It sounds like it should be a wild and mysterious place where the roads are mud and the people dangerous and hard.

Certainly you could imagine that any vodka that came from Kazakhstan would be lethal – a vodka to drink in the depths of the dread experiment that was socialism, the drug that was in plentiful supply, in fact about the only thing that was.

But no, think instead of spring water from the Ala-Tau foothills of the Himalayas and 100% organic wheat grown in the sun. Think vodka purified by being filtered through Kazakh birch charcoal and then distilled five times, the norm is just three. Think a shedload of awards. Oh yes, Snow Queen is no firewater for drinking games with a loaded AK-47

Blimey it’s smooth, no catching your throat and reaching for the wall to support yourself while you cough yourself inside out. This is vodka that doesn’t need tomato or orange juice to make it palatable. It actually tastes of vodka too, which may seem an oxymoron but many vodkas have no real taste at all. You don’t even need ice and it’s best to sip it neat to get the full aroma and flavour.

As you sip, flavours are revealed such as vanilla and a hint of fennel. It’s dry but without being acerbic the puckering sensation, akin to wine’s tannic bite, lasts a few seconds after the swallow.

The bottle is self-consciously a bit retro, but the etched design feels good when you stroke the bottle, as you may feel inclined to do after a few glasses. To eat? Blinis perhaps, caviar of course but best of all would be fine sushi and sashimi.

There are a lots of vodkas out there now, but Snow Queen scores highly against them all and comes in at around £30 for a 70cl bottle at BerryBros at Amazon and at the DrinkShop