Vodka, once regarded as the nastiest, most brutish way of taking on alcohol ever invented, has had a bit of a revival and no more so than in its ‘home’ country of Russia.

For years after the revolution vodka was the only thing freely available in the horror that was the Socialist paradise on earth. The leaders used it as a sedative, an opiate. So what if all you could buy in the shops was a small box of sardines and a doll that fitted inside another doll? You could always get blind drunk, sometimes dead drunk.

Today with so many Russians rich beyond the dreams of even Bill Gates, the national drink has become classier, literally more refined, than the firewater that went before. Russian Standard is now one of the biggest vodka brands in the world and its founder is a zillionaire.

He cleverly saw that vodka could be made cool again. In 1990 he went back to the original ‘standard’ recipe for vodka. This was created in 1894 by Dmitri Mendeleev, Professor of Chemistry at St. Petersburg University and founder of the Periodic Table of Elements, so a man that a lot of school kids have reason to hate.

Now it’s not just even a vodka, Russian Standard’s reach is such that it is also a powerful bank with 23 million loan customers. It’s also one of the biggest insurance companies in Russia. Basically you don’t mess with Russian Standard, or at least you do so at your peril.

We tasted three ‘expressions’ of the vodka, all made with pure glacier water and there’s no doubt that it’s good stuff. Very few vodkas can be sipped neat and enjoyed, most need hiding in cocktails. 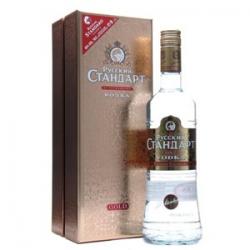 The oily thickness of all the vodkas was indicative of the quality. The best by far was, unsurprisingly, Russian Standard Gold , which contains Siberian ginseng extracts to put some lead in any oligarch’s pencil. It’s also a very smooth and mellow mouthful, especially served over some ice.

The standard Russian Standard actually has an aroma, which cooking vodkas don’t, an almost floral bouquet, perhaps derived from the wheat of Russia that’s used in its manufacture. Good as it was sipped, this did cry out to be added to cocktails where it would add more than just alcohol, but its own flavour too.

You will find Russians who poopoo Russian Standard, who say its market dominance is down to many things not all of them the vodka itself. No doubt the detractors have their valid reasons, but for us in the UK this is a premium vodka that absolutly (sic) stands head and shoulders over its nearest rivals.