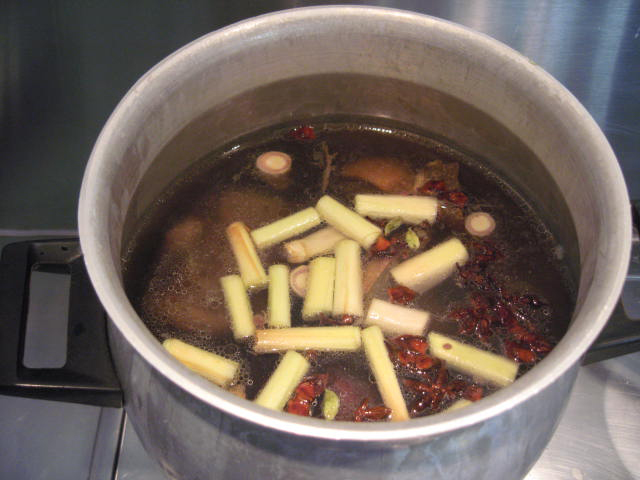 If there is a national dish of Vietnam, it has to be pho. This fragrant noodle soup is slurped around the clock by everyone from business men to students to construction workers, often while squatting on low plastic stools in the street. I used to think my recipe was pretty good – but on a recent trip to Vietnam where I had pho nearly every morning for breakfast, I realised that there were still a few secrets to uncover in making the perfect pho.

This pho recipe is modelled after one I had in the Quan Phu district of Saigon. Apparently the owner is also the district’s health and safety inspector and therefore enjoys major sway with the butchers who save their best cuts of beef for him. One of the secrets to making to an amazing pho stock is charring the onion, shallots and ginger first. This step adds a depth of flavour that turns ordinary pho into amazing pho.

2 medium onions, unpeeled or cut in half if very large

Heat a barbecue until hot. Add the ginger, onions and shallots and grill, turning occasionally until the skin is blistered and charred on all sides. Remove from the heat and allow to cool slightly. Alternatively, place the ginger, onion and shallots in a roasting tin and drizzle with a little vegetable oil. Place the roasting tin in the oven and roast the vegetables for 30 minutes or until they are well browned.

Meanwhile, rinse the oxtail well and place in a large stockpot. Cover with water and bring to the boil. Boil for 3 minutes and then drain and rinse the meat. This step will remove some of the fat giving you a clearer broth.

Return the meat to the pot and pour over the 4 litres of fresh, cold water. Add the ginger, onion, shallots, lemongrass and spices and bring to the boil. Skim any foam or scum from the surface of the soup, then reduce to the a very gentle simmer and cook for 3 hours or until the stock has a good flavour and nice golden colour.

Remove the stock from the heat and allow to cool. Strain the stock through a fine mesh colander and discard the oxtail, vegetables and spices. Place the stock in the fridge overnight to allow the fat to collect on the surface. With a spoon, remove as much of the solidified fat as you can and discard.

Pour the stock into a clean pot and bring to a gentle simmer. Add the fish sauce, salt and sugar.

Serve with an extra plate of herbs to pass around along with the lime wedges and chili sauce.