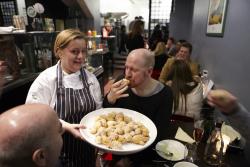 A London café specialising in sweet treats was transformed into a Catalan home kitchen for one night only. Courtesy of Cava producer, Codorníu, ‘Bea’s of Bloomsbury’ was decorated with Bacchanalia.

Drawing inspiration from Barcelona’s diverse barri (neighbourhoods), Rachel McCormack, owner and tutor of ‘Catalan Cookery School’ prescribed a procession of plates for sharing. Some of these were delivered by a waitress from Warsaw who, exotically, sported a necklace of teeth dipped in molten gold.

Originally from Glasgow, McCormack spent much of her twenties nosing Barcelona’s food markets and tapas bars. Of her passion to recreate Catalan flavours, she told Foodepedia: ‘I try to be as authentic as possible whilst being aware that there is no ‘definitive recipe” for anything that comes from a domestic house.’ She added: ‘I am utterly convinced that unless you are a brilliant chef of the calibre of Joan Roca or Ferran Adria, simple is best.’

Pronounced ‘Cod-or-New” according to marketing man, Nick Mantella, Codorníu’s production of still wines dates back to the 16th century. However it wasn’t until 1872 that matters sparkled. Family member, Miguel Raventos ventured to Champagne in search of the secret of luxurious, yeasty bubbles. His ensuing vision saw the construction of the ‘cathedral of cava’, a bodega which spans 30kms over five floors with a total capacity for 100 million slumbering bottles.

Newly introduced, Codorníu Reina Maria Cristina ’08 (£17.99, Noel Young) is Spain’s first white sparkling wine made from the clear pulp of red grapes. Notably lithe, refined, long lived and with the tightest bubbly bead, it sung with a ‘principal’ of rabbit casserole (‘conill amb ceba’). According to McCormack, Mallorcans mark the end of January by lighting fires in town squares whilst eagerly eating this dish.

The rabbit recipe is from Mallorca and is another recipe showing the ingenuity of the peasant making something delicious with only a couple of ingredients. In the past it was cooked on top of a fire because people did not have ovens – but baking the rabbit in the oven means it will not dry out. 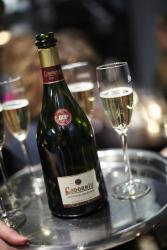