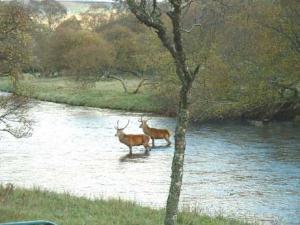 Watching them spar was the best bit. This wasn’t Telford or Gateshead or any town centre but the cock pheasants bickered like the best – or worst – of juiced-up males. The one on the back foot bobbed his red head in frenzy, tail feathers fanned like a fist of spears. The other had the upper claw, smug, goading his challenger while the hens looked blissfully bored. We were taking a Highland Safari with our tour guide, Neil Bain, through the Grampian mountains in Aberdeenshire. The trip was a two-day blur of food, drink – primarily whisky – and gorgeous glen.

Soon once more we were speeding past downy birch and Scots pine forest – worlds away from oil-rich Aberdeen where I’d slept the previous night. I’d stayed in Malmaison, a modern, jiving, boutique chain hotel whose bars – almost club-like – seemed to attract the bold and the monied of Aberdeen.

The restaurant was a similarly swish affair with huge vaulted ceilings and exposed industrial ducting. We’d eaten at the chef’s table – a private room with a window into the kitchen. And if that wasn’t bling enough, the antics of the performing chefs were screened above us on a giant flat screen TV – useful for lulls in conversation. Tragically, my cold had chosen that day to peak. No better time for your taste buds to strike than a foodie trip. Everything tasted of soggy tissue. So all I can say is that everyone else loved the stovies with oatcakes, the neeps & tatties and they sure looked tasty. 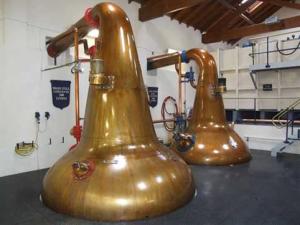 I’d retired to a ridiculously plush room for one such as me. Accustomed to a plastic shower attachment, the rain effect double shower on granite had me whooping like an otter as I danced and swam in a rainbow waterfall. Or perhaps that was the whisky – we’d had a tasting in Malmaison’s whisky snug earlier where I’d tried everything from an astonishingly lively and spicy Bruichladdich Octomore to an orangey Dalmore 12-year-old.

This morning, and the day after the whisky, we’d visited Banchory Farmer’s Market, a sparse but serious affair. I met one hunter, from Mortlach Game, selling roe deer osso bucco at just £3.70 apiece. What’s nice here is there are no middlemen – this man had shot the deer himself and was selling it on stall. I bought a throaty, crumbly Lairig Ghru Cambus O’May cheese, lovely on the local oatcakes

We’d then sped to the bottom of the Queen’s garden. At the edge of the Balmoral Estate is the Royal Lochnagar distillery. According to local folklore, the ‘Royal” was dropped from the title once in a fit of pique after Prince Phillip – always one to make his feelings known – accused the good whisky hole of polluting his land. They’ve all kissed and made up since then and the royals’ altruism is the talk of the locals who can only sing their praises.

Back at Royal Lochnagar, we were told how while Scotch whisky has to be matured for at least three years in an oak cask, this distillery’s spends at least 12 years pooling its flavour in their barrels. The shape of Royal Lochnagar’s copper stills slow down the spirit’s flow during the distilling process giving it a grassy flavour.

‘At Lochnagar we like a nice, slow, gentle maturation,” said the guide. And my dram was a lovely wee thing of sherried fruitcake. In contrast with this long-established operation is the Deeside Brewery where one man is single-handedly running his ale-making business out of an activity centre, brewing 3,000 pints weekly. It’s an odd place to house a brewery where the kids are paint-balling or quad-biking all around you but he seemed to be very buoyant and committed. I tasted a beautiful chocolatey Talorcan ale, not ready but tapped after just four days fermentation. Already it was stylish. 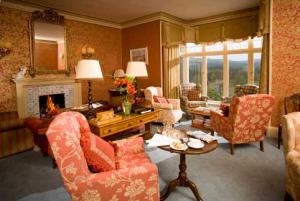 Before heading back from the mountains and monarch of the glen, we ate a good, if simple, venison stew at the Inver Hotel. That night we had dinner at Darroch Learg, a lovely grand granite country house built in 1888 on the slopes of the Craigendarroch hill. The elegant restaurant, which has three AA rosettes, looked right out across the Cairngorms.

A glance at the menu suggested that venison would be the leitmotif of the weekend. And who was I to refuse? Better to eat fresh Glen Muick game on its doorstep than overflown, overpriced deer air-freighted to some Kensington deli. The salty warm Loch Fyne Trout with poached egg and chive butter sauce was fine. But the main, the Glen Muick loin of venison with pithiver of boudin, creamed celeriac and red cabbage was superb. The dish resembled a moorland in colours of heather, earth and maroon. The tangle of caramelised cabbage was sweet enough to slice all that bloody intensity from the blood in the boudin – or black pudding – and the gaminess of the excellent deer. The best, though, was the creamiest quiff of creamed celeriac in the centre. 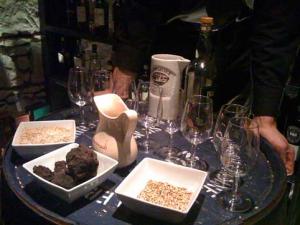 On our way back to the airport we lunched at The Milton, which is in a sweet setting at the elbow of a burbling brook. At the entrance was a big sign requesting the ‘Ladies” to be careful that their stilettos didn’t damage the bamboo floor. But that hadn’t seemed to put off anyone, ladies, men, Billy goats – the place was rammed and there was a steady stream of people being turned away. My twice-baked Strathdon blue souffle with orange and walnut salad was a good size, nicely firm and tasty. I had the fish dish of the day, a pollock on seafood risotto. While the rice was quite al dente, provoking a discussion on risotto technique, it was flavoured beautifully and the pollack’s flavour had come through well. Glad to see the fish is making a comeback. The Milton also sources much of its food from local suppliers – some of the products, like the Cambus O’May Cheeses, I’d bought that weekend at the farmers market.

Back at home, I can still smell that ripe tang of the cheese, a corner of Aberdeenshire in my inner city kitchen